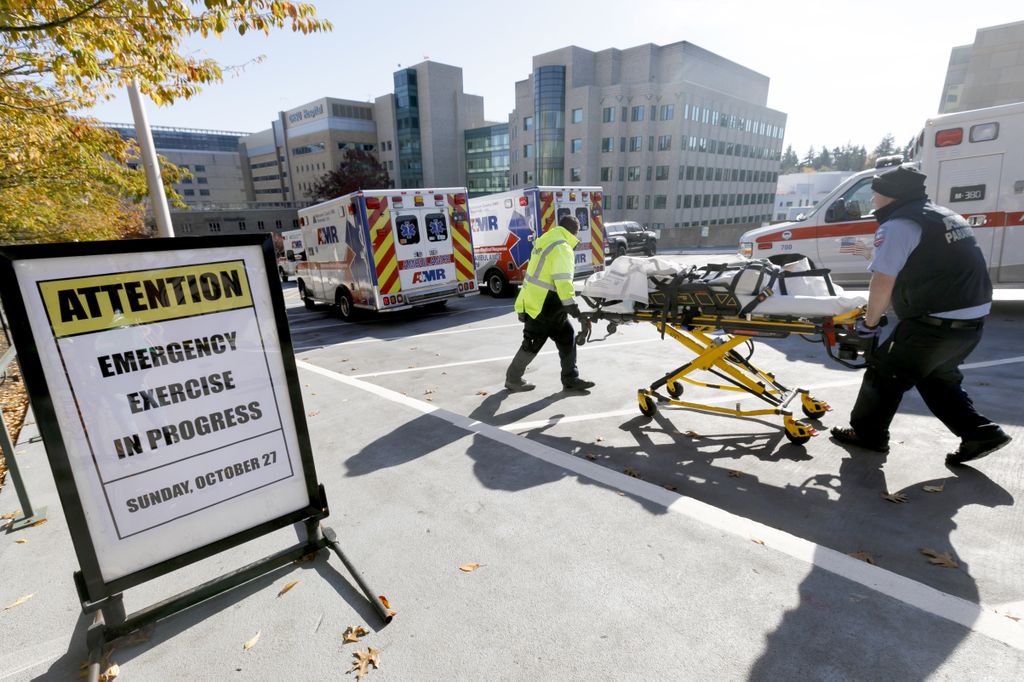 It was a quiet morning on Oregon Health & Science University’s Marquam Hill Campus Sunday. The fall air was crisp with a light breeze. A lone person sat in the courtyard outside of Mackenzie Hall wearing a bright green safety vest with “Exercise Volunteer” emblazoned on the back.

The quiet was suddenly shattered by the staccato “pop, pop, pop” of gunshots.

Two OHSU Police officers quickly appeared on the scene, passing the Exercise Volunteer, who continued to sit at a table and take notes. They eventually entered an empty cafeteria, where they were joined by other members of OHSU Police and Portland Police who had arrived on the scene. 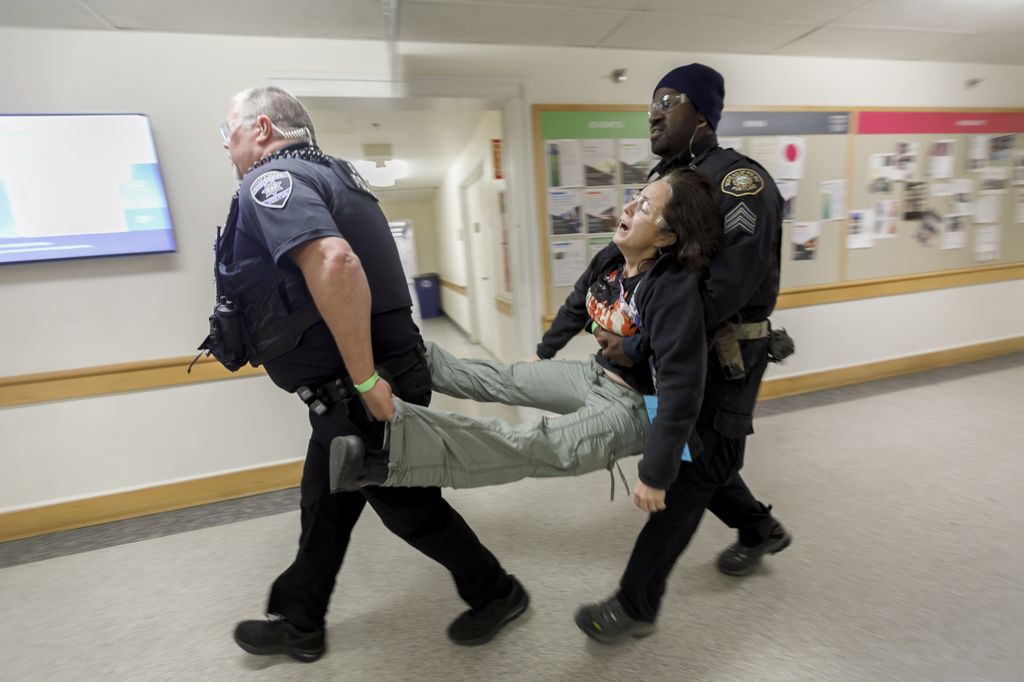 Onlookers might have cause for concern were it not for the signs and flyers posted all over campus notifying visitors of the full-scale emergency exercise taking place among OHSU, Portland Police, Portland Fire and Rescue, and American Medical Response.

“It is a regulatory requirement to conduct exercises and prepare, at least twice a year,” says Susan Ferguson, R.N., OHSU health care emergency manager. “We exceed that on a regular basis because we really want OHSU to be prepared.”

This particular event was the biggest emergency training exercise OHSU has conducted, Ferguson explains, and the first to feature an on-campus threat — OHSU Police were first to respond to the call of an active shooter and Portland Police joined in. Once the threat was neutralized, Portland Fire and AMR triaged more than 30 victims and set up a casualty collection site in a parking lot. Victims were taken via AMR ambulance to the OHSU Emergency Department, and the health care teams took over. 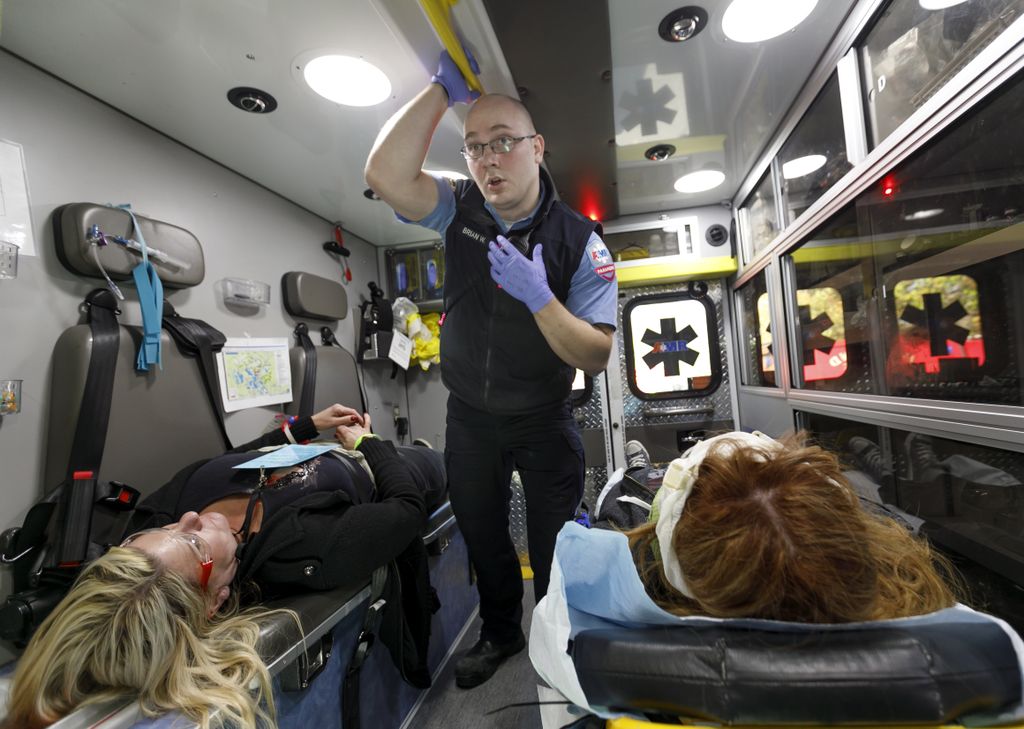 Patient-actors wore blue informational tags with a set of medical conditions on which clinicians made treatment decisions. Patients then were routed to critical care, acute care, operating rooms and the trauma unit.

Had there been a real-world emergency at any time, any or all of the exercise would have been discontinued immediately. At no time was real-world patient care affected.

Following the exercise, exercise participants and observers reviewed what happened and discussed any needed improvements. 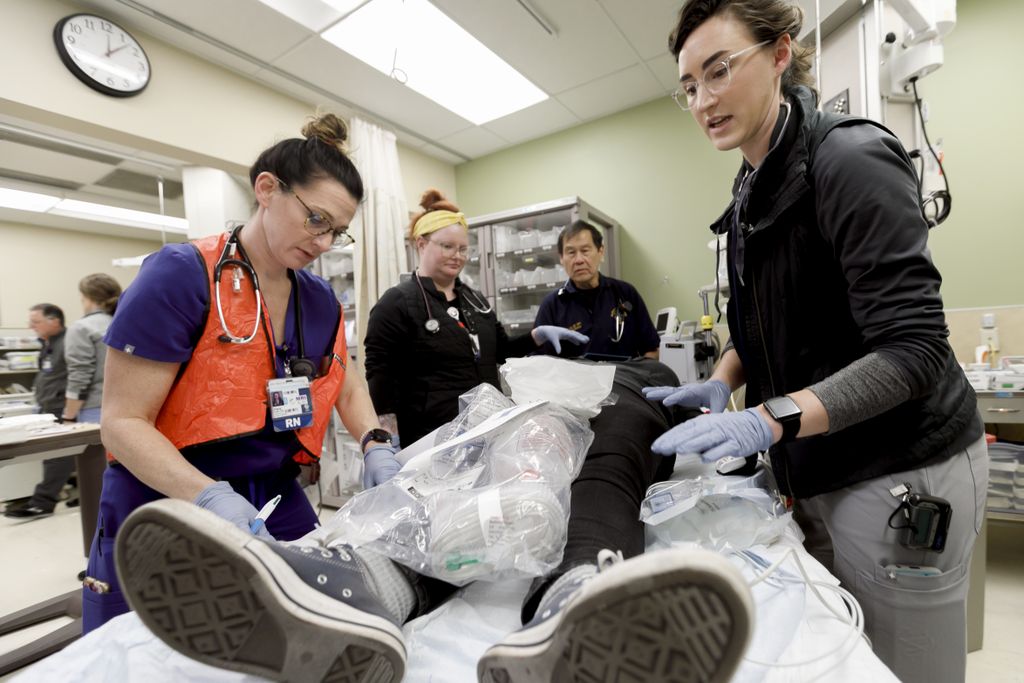 Medical teams in the emergency department treat the "victim" based on a simulated condition presented on a card the victim is wearing.

“Mass casualty incidents are most often rapidly unfolding, large-scale, high-stress events with little time to make adjustments in process if you are not already prepared,” says Greg Moawad, OHSU vice president of campus safety. “Partnering with the City and with American Medical Response in advance of an actual need provided us with an opportunity to test our systems and planning, and to identify potential shortcomings before lives are actually at risk.”

In the coming months, Moawad said emergency management teams will work to evaluate any identified weak spots and implement improvements where necessary.

“It is only through this testing, analysis and follow-through that we can be certain we are in the best possible position to provide emergency services to our community if called upon,” he said.

Brian Wenner of AMR transports two "victims" to OHSU during the exercise. OHSU, Portland Fire and Rescue, American Medical Response and Portland Police held a full-scale active threat exercise at OHSU, October 27, 2019. The exercise tested the capability to respond to a mass casualty event, and allow for improving training and processes, if needed. (OHSU/Kristyna Wentz-Graff)

An OHSU Police officer (left) and Portland Police officer bring out a mock victim during the training. OHSU, Portland Fire and Rescue, American Medical Response and Portland Police held a full-scale active threat exercise at OHSU, October 27, 2019. The exercise tested the capability to respond to a mass casualty event, and allow for improving training and processes, if needed. (OHSU/Kristyna Wentz-Graff)

OHSU, Portland Fire and Rescue, American Medical Response and Portland Police held a full-scale active threat exercise at OHSU, October 27, 2019. The exercise tested the capability to respond to a mass casualty event, and allow for improving training and processes, if needed. (OHSU/Kristyna Wentz-Graff)