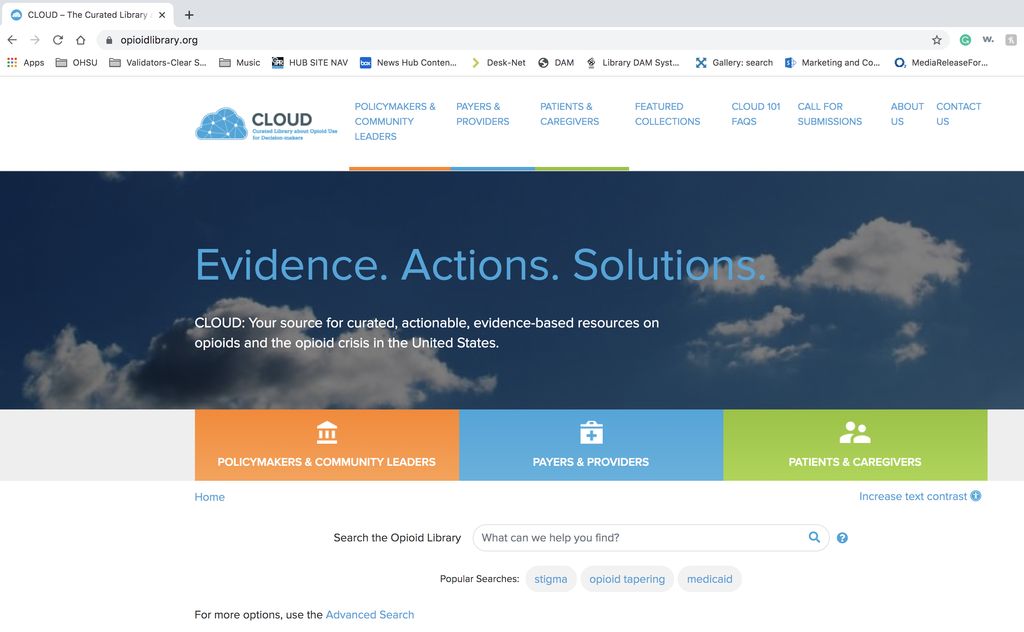 The Curated Library about Opioid use for Decision-maker website, or CLOUD, is an opioid resource site with research, policy prescriptions and therapies vetted and ranked on a sliding scale from “proven” to “problematic.” (Screen capture of CLOUD website)

The epidemic kills tens of thousands of Americans annually, yet decision-makers report that they’ve struggled to make sense of an overwhelming and often-bewildering array of data. It can be hard to discern what may be rife with bias, conflicts of interest or unproven therapies that may do more harm than good.

The new site – www.opioidlibrary.org – provides a single clearinghouse of actionable, evidence-based resources to address the epidemic. The site includes research, policy prescriptions and therapies vetted and ranked on a sliding scale from “proven” to “problematic.”

The site is actively curated and managed by the Center for Evidence-based Policy at Oregon Health & Science University, funded through a settlement agreement involving the off-label marketing of the pain medication Neurontin. The clearinghouse was established with $760,000 through the settlement agreement along with staff support from OHSU.

The site, known as CLOUD, or Curated Library about Opioid use for Decision-makers, is useful for anyone affected by opioid use disorder.

“There is a lot of information, but unfortunately there’s also a lot of misinformation despite the fact that 43 million Americans are affected by this disease,” said Justin Phillips, executive director of Overdose Lifeline, a nonprofit she founded in Indiana after the death of her son from a heroin overdose in 2013.

The new resource provides decision-makers with a transparent and curated source of information. That’s especially important as the federal government ramps up financial support to address the epidemic, and as states and local municipalities negotiate legal settlements with drug companies.

“There is likely to be a lot of money available through legal settlements with opioid manufacturers,” said Allison Leof, Ph.D., senior policy analyst for the OHSU center. “You don’t want it spent on wasteful programs and initiatives that don’t work.”

OHSU experts will curate the site, with a mandate to include virtually any resource that relates in some way to the opioid crisis or related issues such as alternative treatments for pain, addiction medicine, harm reduction and prevention.

Courts, police, jails and correctional institutions across the country will benefit from a clearinghouse of policy prescriptions that have already been vetted, said Jac Charlier, executive director of TASC’s Center for Health and Justice, a Chicago-based national nonprofit that works along the justice continuum from police to parole and all points in between to create safe, healthy and just communities by interrupting the cycle between drugs and crime.

“I see this as a tool for saving lives,” Charlier said.

The library pulls together:

The resources will be ranked on a sliding scale of validity and funding disclosed.

“There’s a lot of wonderful work out there, but people who need that knowledge are not getting their hands on it,” Leof said.