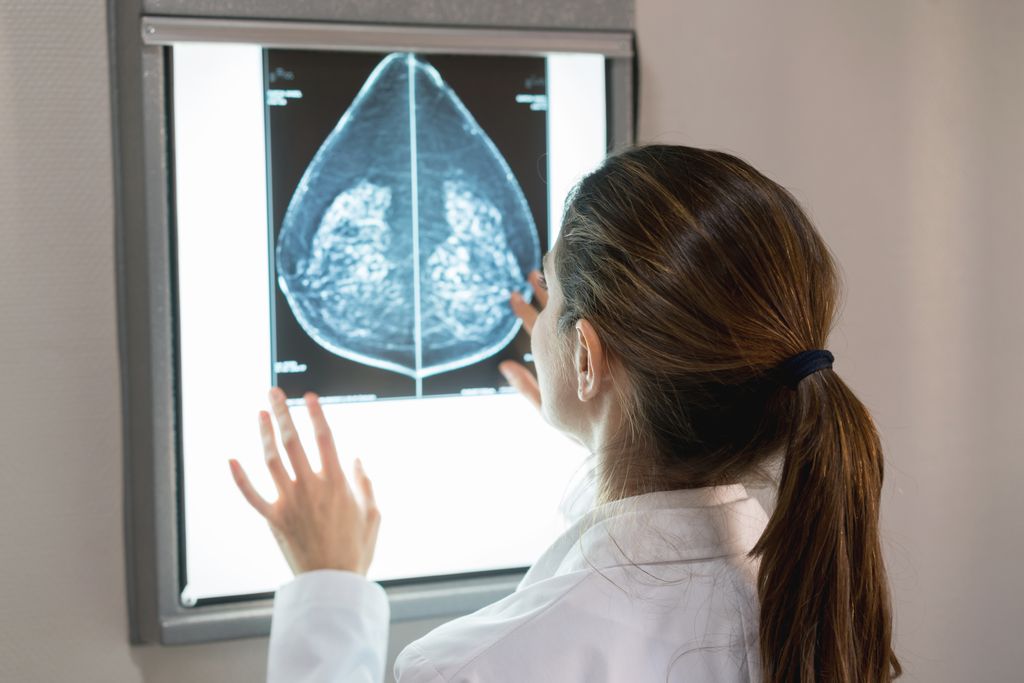 About 20% to 30% of women with breast cancer have tumors that are missed by mammogram screening. And these interval breast cancers – discovered between routine mammograms – seem to be more lethal than those detected by screening. A new study by Oregon researchers has found that survival is worse only if the interval cancer appears within one year after a mammogram that did not detect cancer.

“One would think that the longer you are from your negative screen, the larger and deadlier the tumor would be. But we found that the ones that were diagnosed within one year were larger and more lethal,” said Oregon State University’s Veronica Irvin, Ph.D., M.P.H., joint first author of the research with Zhenzhen Zhang, Ph.D., M.P.H., at OHSU. The team also includes senior authors Pepper Schedin, Ph.D., and Sonali Jindal, M.D., at OHSU.

The findings add to the evidence that some interval breast cancers may be fundamentally different from screening-detected cancers, and that their unique biology makes them more dangerous. “Current screening strategies are not good enough to identify these interval breast cancers,” Zhang said. “We need more research to find a better way to find them in time.”

It’s been known for years that interval breast cancers tend to be diagnosed at a more advanced stage than screen-detected cancers. Interval cases have also been associated with two to three times higher risk of death from breast cancer compared with screen-detected cases. But previous studies have left unknown whether the timing of the interval cancer makes a difference in how aggressively it behaves. To find out, Irvin and Zhang turned to the Women’s Health Initiative, a national study that enrolled participants from 1993 to 1998 and has continued to track their health over the years.

The Oregon researchers focused on a subset of 3,019 women who were diagnosed with breast cancer and who had received regular mammography screening. They looked at rates of death from breast cancer in interval cases detected less than one year after a negative mammogram and between one to two-and-a-half years after. They compared these interval cancers with rates of death in screen-detected cases. They also compared tumor characteristics for each group.

About two-thirds of the breast cancers were detected by screening, and one-third were discovered between screenings. Among the 1,050 interval cases, 324 were diagnosed within the first year after a negative mammogram, and 726 interval cases were diagnosed later, one to two-and-a-half years after a negative mammogram. There were no differences by age at diagnosis, race, family history of breast cancer, having given birth, or co-existing illness between screen-detected and interval cases.

Tumor characteristics differed significantly between interval cases and screen-detected cases, but only for interval breast cancers diagnosed in the first year after a negative mammogram, according to an analysis led by Jindal, a pathologist. The early interval cancer cases had significantly larger tumor size and a higher proportion of them had lymph node involvement and lobular tissue type compared to screen-detected cancers. No differences in tumor characteristics such as size, grade, histology, biological subtype or lymph node involvement were observed between the later interval cases and screen-detected tumors.

In the early interval cases, the higher risk of breast cancer mortality compared with screen-detected breast cancers remained significant after controlling for several factors known to influence cancer outcomes, including hormone receptor status and whether the tumor originated in ductal versus lobular tissues of the breast.

“It really does look like these are an aggressive form of breast cancer not detected readily by mammography,” said Schedin, the co-senior author of the paper. “This research helps us narrow the focus to the tumors we need to study to understand mechanisms of increased aggressiveness.”

Zhang said one next step will be to obtain and analyze breast cancer tissues to compare the underlying biology of interval tumors and those detected by screening. Zhang and colleagues are establishing an interval breast cancer registry and hope to enlist researchers at other cancer centers.

“It may be possible to find biomarkers to identify high-risk groups for interval breast cancers and then apply a more targeted screening strategy to these individuals,” Jindal said.

Meanwhile, Irvin said it’s important for women to pay attention to symptoms and not be lulled into a false sense of security by a negative screening mammogram. “The idea should be, yes, keep on with your screening, but also be aware of your body.”

The most common symptom of breast cancer is a new lump or mass. Other possible symptoms include swelling of all or part of a breast even if no lump is felt, skin dimpling, breast or nipple pain, nipple retraction, nipple discharge, irritated flaking or thickened skin, or swollen lymph nodes.

The funding sources had no role in the design and conduct of the study; collection, management, analysis, and interpretation of the data; preparation, review, or approval of the manuscript; and decision to submit the manuscript for publication.

Previous Story Survey: Alternative medicine is widespread among people with MS Next Story Restructuring of Medicaid reimbursement model reduces imaging, to the benefit of patients