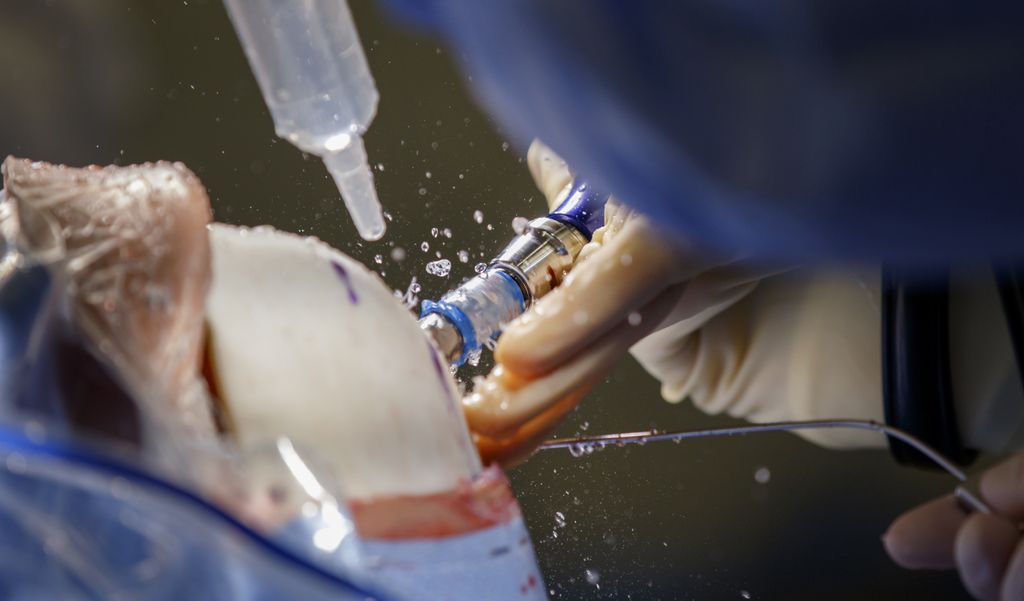 A first-year neurosurgery resident drills through a 3-D printed model of a skull as he trains with a brain surgery simulator developed at OHSU. Such hands-on training is among the innovations that have transformed training of America's brain surgeons, according to a report published today in the Journal of Neurosurgery.

An evolution in the training of American neurosurgeons over the past two decades has led to cohesive national standards that will improve patient care, according to a new report published today in the Journal of Neurosurgery.

The study was co-authored by 24 neurosurgeons across the country, including two from Oregon Health & Science University, where much of the work originated.

Lead author Nathan R. Selden, M.D., Ph.D., chair of neurological surgery in the OHSU School of Medicine, described the report as a landmark in the development of neurosurgery training in the United States.

“This is a report of two decades of work that has made neurosurgery training in America radically more effective and safe, and is turning out better neurosurgeons,” he said. “OHSU has been a leading center driving this.”

Selden serves as secretary of the Society of Neurological Surgeons, or SNS, which represents residency program directors and academic department chairs in the U.S., and led the development of uniform national training milestones described in the report.

Co-author Kim J. Burchiel, M.D., former chair and professor of neurological surgery in the OHSU School of Medicine, led creation of a new national “matrix” curriculum for neurosurgery that remains in use today. Burchiel is a past president of the SNS and its current historian.

Since then, the organizations have continued to refine and improve training standards for neurosurgeons.

Beginning in 2010, a series of “boot camp” courses were held at OHSU along with five other regional sites across the country with 100% participation by entering neurosurgical residents in the U.S. Supervised by the SNS, the boot camps’ unified a curriculum emphasizing hands-on skills, behaviors and knowledge to provide a common foundation in training new generations of brain surgeons. OHSU had piloted the boot camps in 2009, eventually serving as a model for resident training in other surgical disciplines.

Hands-on training includes a neurosurgery simulator in which residents, hooked up to Fitbits measuring their heart rate, navigate a hair-raising scenario using a 3D-printed skull and brain with mock bleeding.

These boot camps, which continue to be conducted annually, also have been adopted at various sites globally.

Beyond the hands-on skills, the Accreditation Council for Graduate Medical Education, or ACGME, which sets requirements for residency programs in the U.S., has undertaken extensive reforms, including new standards for the support of physician wellness during training; new measures of accountability; and specific educational milestones.

The SNS, working in cooperation with the ACGME, also has established rigorous national standards for accrediting neurosurgery specialty fellowships.

“Based on this strong foundation of cooperation and achievement, the future of neurosurgical education in the U.S. is auspicious,” the report concludes.

The article was accompanied by an editorial by the editor of the Journal of Neurosurgery. In their response to those comments, Selden and colleagues outlined progress in their specialty in advancing racial and gender equity, anti-harrasment, and physician wellness.

A surgeon drills through a 3-D printed model of a skull, as he trains with a brain surgery simulator developed at OHSU, allowing doctors to gain experience without risking the life of a real patient. (OHSU/Kristyna Wentz-Graff)