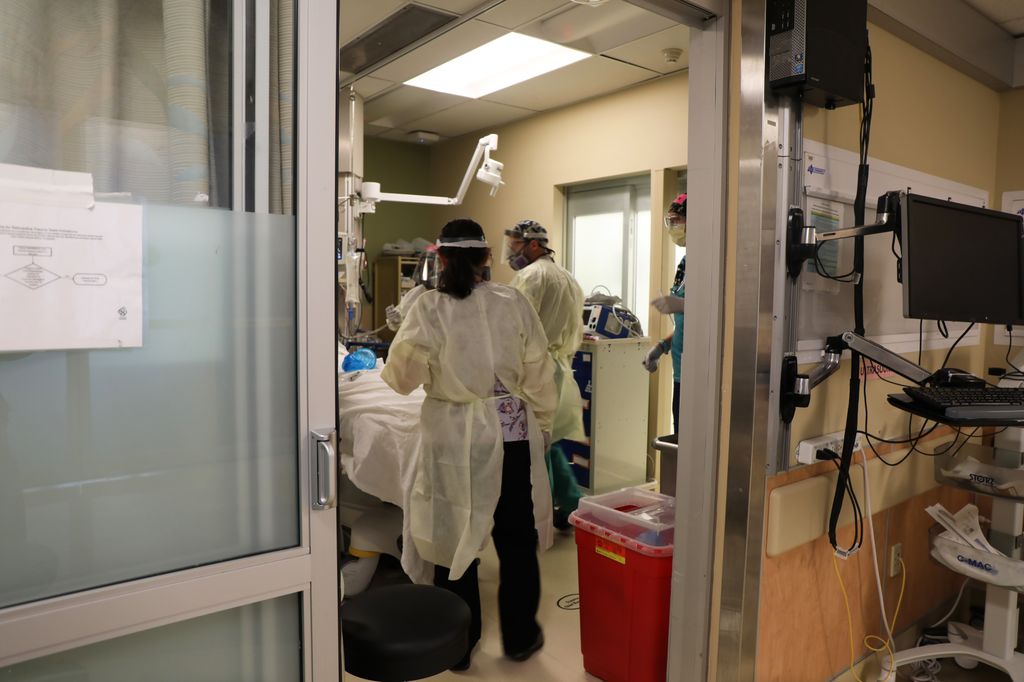 The number of people hospitalized for COVID-19 in Oregon will peak this weekend near current levels, and then steadily recede to pre-omicron levels by the end of March, according to the latest forecast update from Oregon Health & Science University.

Oregon hospitals will remain under severe strain through February. However, Oregonians’ actions to reduce the spread of a highly contagious virus variant appears to have paid off: Oregon is experiencing a lower rate of severe illness than states on the East Coast, where the omicron variant first took hold in the United States.

“The way Oregon handled omicron is almost as good as you’re going to see,” said Peter Graven, Ph.D., director of the OHSU Office of Advanced Analytics. “Oregon pushed out booster shots, Oregonians modified their behavior early, before omicron fully arrived here, and we kept our masking rates relatively high compared with other states.

“Because of that, our surge was way lower than other places on a per-capita basis.”

The new forecast shows that Oregon is essentially peaking now.

The average peak across the rest of the U.S. is more than a third higher per-capita than the 1,087 people currently hospitalized in Oregon. If Oregon had followed those national trends, Graven projects it would have amounted to a peak of around 1,540 in the hospital with COVID-19.

He expects it will be much more difficult to generate large new spikes in hospitalizations going forward, even though people’s immunity will wane over time.

“We’re going to still have plenty of cases in Oregon, because with any hill there are just as many infections on the way down as on the way up,” Graven said. “But we have a lot of immunity in the population now. It’s going to be harder and harder for the virus to put somebody in the hospital.”

“We’re at the peak any time now,” Graven said.

The hospital census tracked by the OHA notes that 32% of intensive care unit capacity is filled with COVID-19 patients, which is above the 25% figure from last week but still well below the nearly 60% figure during the peak of the surge in cases from the delta variant in September 2021.

The forecast factors in assumptions about the number of hospitalized Oregonians admitted with “incidental” cases of COVID-19. The number of these incidental cases — meaning people who are admitted for other conditions but also happen to have COVID-19 — has been part of the case-mix throughout the pandemic.

Because omicron is spreading so rapidly, it will increase the proportion of COVID-positive patients who are in the hospital primarily for other reasons: heart attacks, cancer treatment, motor vehicle crashes and other conditions that require care in a hospital.

Even so, these incidental cases still increase the burden on health care resources. The reason is twofold:

Graven noted that these incidental cases are somewhat balanced out by the number of COVID-19 patients in the hospital who aren’t explicitly counted in statewide figures — those who have been in the hospital long enough that they’re no longer infectious, but still taking up a hospital bed.

OHSU is providing resources for those seeking a test and vaccine. Those who experience symptoms, or test positive, should first call their health care provider before seeking care in a hospital emergency room. OHSU has also established a toll-free hotline for people anywhere in the state to seek guidance about symptoms and care for COVID-19. Oregonians can call 833-OHSU-CCC (833-647-8222) seven days a week between 8 a.m. and 8 p.m.