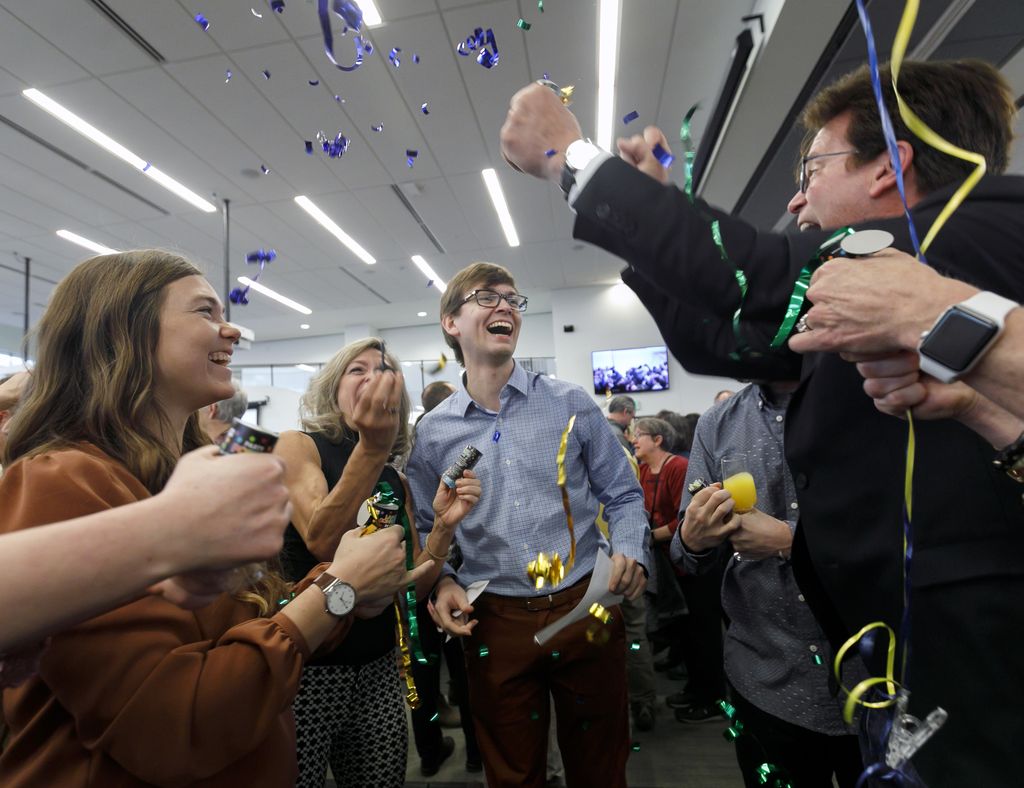 For the first time since the COVID-19 pandemic began, the OHSU School of Medicine will offer a hybrid Match Day celebration for its M.D. class of 2022. The class’ 149 members will either participate in person or virtually to learn where they will spend the next three to seven years as medical resident physicians. Shown here is OHSU’s 2019 Match Day festivities, which was the last time the university held the event in person. (OHSU/Kristyna Wentz-Graff)

For news media: The OHSU Match Day event begins at 8:15 a.m. Friday, March 18, at the Robertson Life Sciences Building on Portland’s South Waterfront. Media planning to attend should gather in the first-floor atrium no later than 8:30 a.m. Please confirm your attendance by 5 p.m. Thursday, March 17, with Franny White at whitef@ohsu.edu or 971-413-1992.

This Friday, March 18, all 149 members of the OHSU School of Medicine's M.D. class of 2022 will find out where their futures as physicians will take them.

That morning, fourth-year medical students who attend OHSU’s in-person Match Day event will tear open envelopes that have been neatly lined up on a table before them, while virtual attendees will click on a link from their computers. Whether they’re looking at a piece of paper or a webpage, the students will all learn where they’ll spend the next three to seven years as resident-physicians at medical facilities across the United States.

Most residency assignments are made through the National Resident Match Program, which uses a sophisticated computer algorithm to pair students with graduate medical education, or residency, programs based on student applications, interviews, and student and program preferences.

After the pandemic prompted two years of virtual-only celebrations, OHSU is making this year’s Match Day celebration a hybrid occasion, with both in-person and virtual attendance options for students and their loved ones. In-person guests will offer proof of vaccination or a recent negative COVID-19 test result.

Also new in 2022: 92% of this year’s class is expected to complete their graduation requirements on Friday. Students are able to graduate early thanks to the OHSU School of Medicine’s competency-based, time-variable M.D. curriculum. Last year, 78% of OHSU’s M.D. class completed their medical education on Match Day.

Below are short profiles of a few members of the OHSU School of Medicine’s class of 2022 who will participate in this year’s Match Day ceremony. All of them will graduate early on Friday.

Nathan and Mary Earp (Courtesy of the Earps)

Nathaniel “Nate” Earp and Mary Earp are used to sharing. But after four years of attending OHSU together as brother and sister, they’re preparing for the possibility that they may soon need to go their own, separate ways.

Nate, 29, and Mary, 27, grew up in West Linn and both studied science at University of Oregon — where Nate earned a bachelor’s degree in human physiology, and Mary earned a bachelor’s in biochemistry. They both volunteered for a nonprofit clinic in Oregon City, and each also worked at the same Hillsboro doctor’s office. And now, they’re about to graduate from OHSU and begin internal medicine residencies.

“It’s been awesome,” Nate said of completing medical school with his sister. “Some siblings might not do this well together, but it’s been perfect for us. We share everything with each other.”

But, with Mary also participating in a partner match so she and her partner can have residencies in the same city, the siblings know the odds of both of them also being placed in the same residency program aren’t high.

“I’ll be sad if we go separate places,” Mary said. “My brother is like my best friend.”

But even if they go through residency separately, they’ll be driven by the same personal experiences: seeing their mother die of breast cancer in 2016, and later helping their father while he underwent lymphoma treatment at OHSU and they were in medical school.

They are thankful their father is doing well today. Now, the siblings want to take the same empathy and human touch they received during their parents’ health struggles and offer it to their own patients and their families.

The many professional and personal twists and turns Genevieve Benedetti, a mother of twin 1-year-olds, has taken over the past two decades will cumulate this month with her completing medical school at age 39.

She decided to change careers at age 30, after earning a master’s degree in public policy from the University of Chicago. While working at a child and family policy research center, Benedetti supported a program that offered home health visits for new mothers of vulnerable children. She was inspired to see evidence-based policies used to address health disparities and decided to combine her policy interests with clinical work by pursuing a career in medicine.

After growing up in Ashland since the seventh grade, she decided to move back to Oregon and enrolled in post-baccalaureate, pre-medical courses at Portland State University. For four years, Benedetti took core science classes while also working as a medical scribe at local emergency departments.

Before starting at OHSU in fall 2017, she married her long-time partner, who had moved with her to Portland from Chicago. Mid-way through her medical education, Benedetti became pregnant with twins. She took a leave of absence and gave birth to a boy and a girl in February 2021. She says raising children while completing medical school has helped her become comfortable with uncertainty — including not knowing where she will be matched for an internal medicine residency.

“It’s been a long road to get this to place,” Benedetti said. “I’m grateful to so many people for helping me get here, because I could not have done it on my own. That’s the thing that has sustained me these last five years: the support of family and friends, and the many patients who have been willing to have me involved in their care.”

Wherever she and her family head next, Benedetti looks forward to providing holistic medical care and partnering with patients to help them overcome health challenges.

Because her twins aren’t yet old enough to be vaccinated against COVID-19, Genevieve plans to virtually attend Match Day festivities from her home, with her family at her side.

Future eye doctor inspired by experiences as an immigrant

Sen “Andrew” Yang will be among just five members of OHSU’s M.D. Class of 2022 who already know where they’ll go for residency training.

He learned on Feb. 8 that he will stay in Portland as an OHSU ophthalmology resident, because   ophthalmology is one of a few medical specialties that use a different residency matching service. The news came with a click on a website at 5 a.m. , followed with a few celebratory texts and phone calls with family and friends. Even so, Yang still plans to attend OHSU’s Match Day event to commemorate his and his classmates’ accomplishments.

Yang was 8 when he, his parents and his younger brother immigrated from China. They received asylum from the U.S. after their relatives had been persecuted for private land ownership. Despite only speaking Cantonese, Yang’s parents worked hard to ensure he and his brother could take full advantage of every opportunity that was available in their new country.

While living in San Gabriel, California, his interest in medicine was partly sparked by his mother, who worked as a caregiver at skilled nursing facilities. He was further nudged toward medicine after realizing his grandparents received lower quality health care in China than what was available to his immediate family in the U.S.; he aspires to share his medical skills internationally, as well. He says: “It’s my responsibility to help medicine advance in the rest of the world, too.”

He earned a bachelor’s degree in cell biology from University of California Davis, where he also volunteered at a student-run clinic that provides free care to underserved Asian residents. At OHSU, he also volunteered for the Casey Eye Institute’s Community Outreach Program, which offers free mobile eye exams and screenings for underserved Oregonians. As an ophthalmologist, Yang looks forward to helping his patients preserve their sight.

Yang is the first member of his family to go to college. While his immigrant parents helped him passionately pursue his goals and taught him the value of hard work, he also credits his success to the support of mentors who helped him navigate many educational opportunities in the U.S.

For the first time since the COVID-19 pandemic began, the OHSU School of Medicine will offer a hybrid Match Day celebration for its M.D. class of 2022. The class’ 149 members will either participate in person or virtually to learn where they will spend the next three to seven years as medical resident physicians. Shown here is OHSU’s 2019 Match Day festivities, which was the last time the university held the event in person. (OHSU/Kristyna Wentz-Graff)

They kept their eyes on the prize