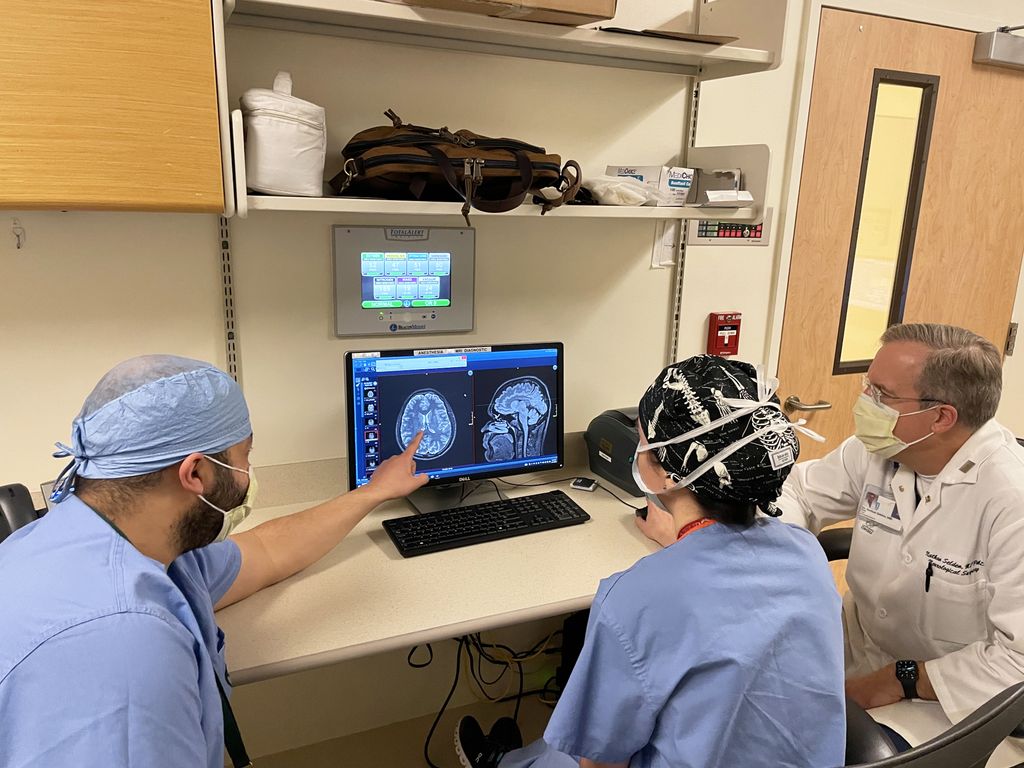 If you’re a college basketball fan, March is synonymous with the March Madness tournament. But in the land of medical education, this third week of March is all about the Match — culminating on Friday, when fourth-year medical students across the country learn to which residency program they have “matched” for the next three to seven years as a newly minted physician.

The focus is often on the experience of the medical students, especially now as they gather in person to celebrate after a two-year pause. But, behind the scenes, residency programs are also taking stock of lessons learned during the two COVID-19-imposed virtual recruitment cycles, and are hoping to use this sea change as an opportunity for improvement.

A leading example is neurosurgery — the most competitive match in the country, and, at seven years of training, typically the longest residency. OHSU faculty members are at the forefront of shaping reform.

“The pandemic brought to a halt the long-time practice of medical students crisscrossing the country for campus visits and interviews at the programs they were eyeing. The shift to virtual interviews was a massive change,” says Nathan Selden, M.D., Ph.D., professor and chair of neurosurgery, OHSU School of Medicine, and an executive leader in the Society of Neurological Surgeons. “But rather than resetting to our traditional approaches now, we want to seize this opportunity to take a leap forward.”

Selden and co-authors nationally have analyzed and documented in three recent journal articles* the impacts of virtual recruitment on the 2021 cycle. Key findings include:

The co-authors’ recommendation: a hybrid approach that includes virtual interviews, but then opportunities for in-person visits to learn more about the culture.

The proposal for neurosurgery residency programs: programs rank students after the virtual interviews, when there is more of a level, less costly and more accessible playing field. Then, applicants seeking more insight on a program’s culture could make campus visits, after which the applicants would rank their programs of interest. Ultimately, the “match” occurs when programs’ and prospective residents’ rankings are matched, creating a pairing.

This system would give students who are able to make campus visits the advantage in their ability to gauge a program’s culture, housing and other quality of life considerations before ranking it. But the program’s ranking of the students would not be impacted, and programs could focus scarce resources on covering more of the expenses for fewer in-person visits.

“The campus tour provides additional information and the opportunity to explore the surroundings, but would not be required in terms of success or entrance into the program,” says Selden. Together with other SNS leaders and the society’s Committee on Medical Students, Selden is bringing this approach forward to residency programs, the American Association of Medical Colleges and other stakeholders.

It is notable that neurosurgery is on the leading-edge, shaping change.

Until the turn of the century, the field was known for a traditional approach to residency education and an insular, who-you-know approach to recruitment.

“This really limited our access to some of the most talented new medical school graduates, who these barriers negatively influenced, including underrepresented minority candidates and women,” Selden says.

But, for the past 20 years, driven by a desire to advance and diversify the profession, physicians like Selden and Kim Burchiel, M.D., professor and former chair of neurosurgery, OHSU School of Medicine, and others at OHSU and beyond have emerged as reformers.

Selden pioneered neurosurgery boot camp courses for first-year neurosurgery residents at OHSU in 2009, in order to enhance rigor and elevate professionalism, communication standards and technical skills. The SNS partnered with him to take the boot camps national in 2010, and they have since also proliferated to other specialties and locations around the world.

“It took a lot of leadership by a lot of people, and a willingness for my generation to part with old ways and stay engaged as mentors,” says Selden, now finishing a five-year term as secretary of the society. “I am most proud that a new generation of neurosurgical educators is now taking up the work at OHSU.”

Among those OHSU School of Medicine educators picking up the torch: Christina Sayama, M.D., associate professor and head of the Division of Pediatric Neurological Surgery, is one of a dozen leaders nationally working on a quality and outcomes curriculum for all U.S. trainees. Josiah Orina, M.D., and Jesse Winer, M.D., both assistant professors of neurosurgery, are bringing innovations to the OHSU residency program as associate directors. Recently, Selden recruited Christina Huang Wright, M.D., and James Wright, M.D., award-winning medical educators at Case Western Reserve University, as assistant professors. They co-authored the World Neurosurgery journal article with Selden.

“The pandemic strained and tested all of us,” says Huang Wright. “But I am energized that we are turning these challenges into opportunities to evolve and explore areas for improvement in the interview and match process. It’s an exciting time to be in neurosurgery education and to be at OHSU.”