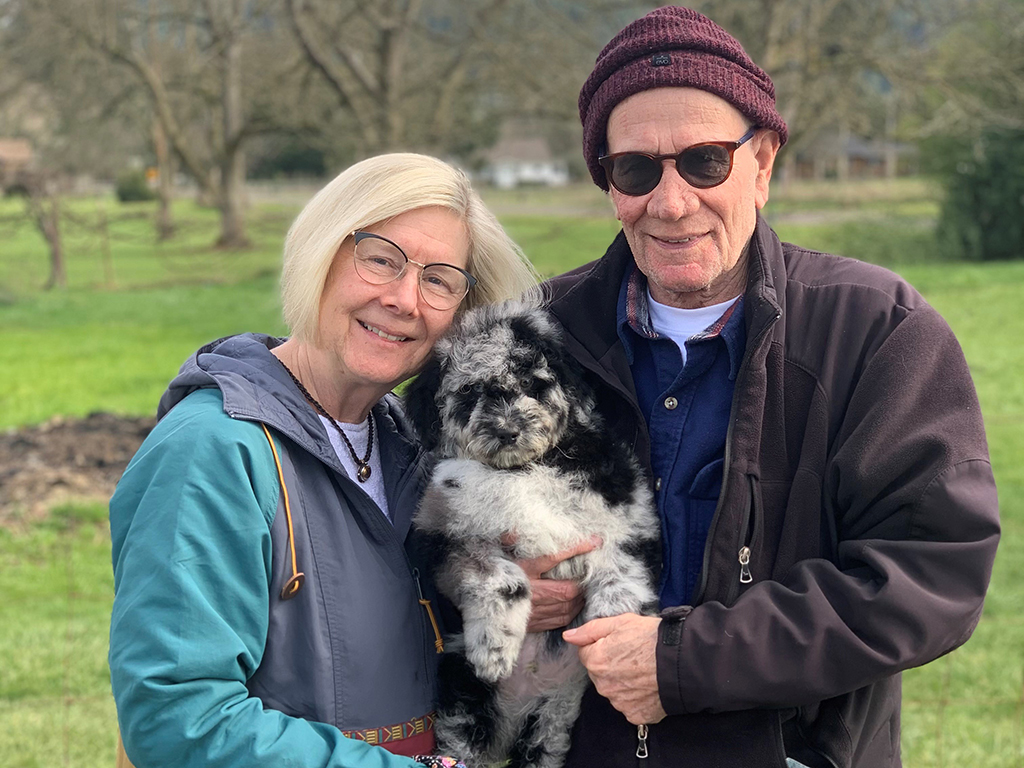 Susan and Jerry Widawski hold their new puppy. More than two years since his last chemotherapy infusion, Jerry Widawski is cancer-free. (Courtesy of the Widawskis)

Jerry Widawski knew the statistics were not in his favor. At age 68, he was diagnosed with a rare and difficult-to-treat cancer, called intrahepatic cholangiocarcinoma, that was destroying his liver.

“I don’t know what percentage of people survive what I have; probably not many,” Widawski says. “They gave me less than a year.”

Because of the rarity of the disease “we didn’t really have a prescribed course,” says his wife, Susan.

The course they chose to follow took them to the OHSU Knight Cancer Institute, where a surgical specialist in treating advanced liver tumors came up with an intricate and demanding plan. It would require a series of operations over many months, including the surgical implantation of a device to infuse chemotherapy drugs directly into the liver, called hepatic arterial infusion. No one could predict the chances of success.

“I don’t even know if I can express what worries I had because I was worried about everything,” Susan says.

Now, more than two years since his last chemotherapy infusion, Widawski is cancer-free. And his surgical oncologist, Skye Mayo, M.D., M.P.H., is leading a clinical trial at OHSU to find out whether the treatment strategy can be extended to save the lives of more people with cholangiocarcinoma.

“I think we have a lot to learn from Mr. Widawski,” says Mayo, an associate professor of surgery in the OHSU School of Medicine.

Cholangiocarcinoma of the liver is diagnosed in about 5,000 people each year in the U.S. — and the incidence is increasing. Surgery to remove such cancers is rarely curative, especially if it has spread within the liver. Cancers return in 60% to 70% of cases within five years, Mayo says, and surgery is only feasible in about 10% to 20% of people with cholangiocarcinoma of the liver.

In Widawski’s case, surgery seemed to be out of the question. The cancer had taken over too much of his liver. “It is kind of surreal when you get that kind of diagnosis,” says Widawski. He had been active and in great health, playing volleyball competitively for many years and practicing law in Astoria. His only symptoms had been weight loss and fatigue.

After the diagnosis, “I was prepared for the worst,” he says. “It was going to be what it was going to be. I’m a pragmatist. I don’t worry about things I can’t control.”

Working with the hepatic arterial infusion team at OHSU, Mayo’s multi-step plan aimed first to shrink the tumor with high-dose chemotherapy. That required surgically implanting an automated pump to infuse anti-cancer drugs directly into the liver via the hepatic artery. This makes it possible to expose the cancer to doses 400 times stronger than if the drugs were delivered intravenously into the general circulation and exposing non-target organs, Mayo says.

Widawski spent a year with the implanted pump delivering chemo drugs into his liver at a fixed rate, overseen by a team that includes OHSU oncologist Adel Kardosh, M.D., Ph.D., a specialist in gastrointestinal cancers. Over several months, the drugs delivered by hepatic arterial infusion knocked back the tumor enough to make it possible to attempt surgical removal of the cancer.

But first, Mayo had to stimulate growth of healthy liver tissue to take over the work of the parts of the organ that would have to be removed along with the tumor. Mayo accomplished this with a procedure called portal vein embolization, which blocked blood flow to all segments of the liver with cancer.

“The side of the liver without cancer will grow large enough so you can remove all the cancer-containing large part of the liver and not go into liver failure,” Mayo says.

It took just four weeks after the embolization procedure for the clear fraction of the liver to expand sufficiently. Two weeks later, Widawski underwent surgery to remove the cancerous segments of the liver, leaving behind healthy, cancer-free liver. The amount of cancer remaining in the removed sections was minimal, but dense scarring, called fibrosis, was extensive. All of his lymph nodes tested negative for cancer. “So, an incredible response,” Mayo says.

Inspired by the results, Mayo developed and opened a phase 2 clinical trial (the HELIX-ICC study), enrolling people with liver cholangiocarcinoma that is considered inoperable. Selection criteria rule out people with cancers spreading beyond the liver and those previously treated with radiation, among other exclusions.

“We want to be sure, before we expose you to an intensive sequence of treatment, that we are really doing it for the right reasons,” Mayo says. “We want to be sure that we have done all we can to identify patients that have disease outside of the liver or that are not going to benefit from this.”

The study is digging far deeper than a typical clinical trial, with co-investigators from many disciplines gleaning insights. Collaborating scientists are studying multiple aspects of tumor response to therapy, including gene activity and interactions with the immune system. The complex trial was launched at the height of the COVID-19 pandemic.

“We are allowing the patient and the research team to come together to adapt and see, based upon all the evidence, what we should be doing for your cancer,” Mayo says. “And that’s not the same treatment for everybody. After patients have completed the clinical trial protocol, we then adapt and personalize the approach to the specific aspects of their unique cancer.”

Patients’ quality of life is being assessed at baseline, four points during treatment, and at two additional points after the six-month treatment protocol is completed. This unique quality-of-life research is led by Lissi Hansen, Ph.D., R.N., a professor in the OHSU School of Nursing.

“So many people, when diagnosed with this disease, are left with the impression they have six to nine months to live,” Mayo says. “After you’ve survived more than six to nine months, what is your life like now? What does survivorship mean? That’s what Dr. Hansen’s quality-of-life research is really highlighting for our patients on the trial.”

Susan Widawski says one of her greatest concerns was the potential for the demanding treatment to harm more than help. “With it not being known as to what the outcome might be, I think I worried more about him going through all the treatment and not having a good quality of life,” she says. “It hasn’t been an easy course, but that wasn’t Jerry’s mindset. I think he had the belief that if he could help advance any new science or that he might help other people he would go forward.”

Her husband says the hardest part has been some of the after effects of repeated surgeries. “I lost a lot of weight. I can’t seem to get it back. Other than that, I’m doing good,” he says. “Perseverance is what I learned. I didn’t have much of a chance. For me, it was the doctors — they are the ones who gave me a chance to make this thing work for me.”

Widawski continues to practice law, although he says he’s heading into semi-retirement. The couple recently bought a camper and are planning summer travel adventures.

Jerry Widawski had been active and in great health, playing volleyball competitively for many years and practicing law in Astoria. His only symptoms had been weight loss and fatigue. (Courtesy of the Widawskis)

The Widawskis recently bought a camper and are planning summer travel adventures. (Courtesy of the Widawskis)

Susan and Jerry Widawski hold their new puppy. More than two years since his last chemotherapy infusion, Jerry Widawski is cancer-free. (Courtesy of the Widawskis)