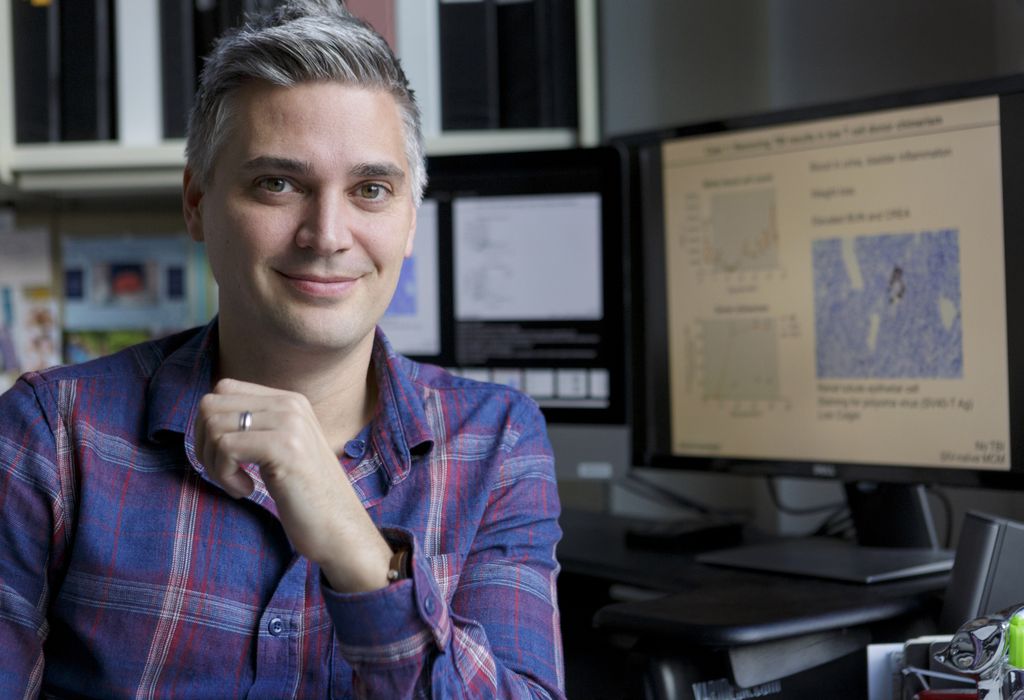 Sept. 13, 2022, UPDATE: Jonah Sacha, Ph.D., and his OHSU colleagues are conducting another, related leronlimab study after OHSU was awarded another NIH research grant.

A new pre-clinical study in nonhuman primates will evaluate an experimental drug’s potential use as a gene therapy that could prevent people who have HIV from having to take daily antiviral drugs for the rest of their lives.

The research will be led by Oregon Health & Science University researcher Jonah Sacha, Ph.D., who also serves as a scientific adviser to CytoDyn, the biotechnology company developing the drug, called leronlimab. The study is funded by a five-year grant of up to $5 million that was recently awarded to OHSU by the National Institute of Allergy and Infectious Disease, which is part of the National Institutes of Health.

“This grant will fund the development and early study of leronlimab as a potential single-injection gene therapy,” said Sacha, professor at OHSU’s Vaccine and Gene Therapy Institute and Oregon National Primate Research Center. “If this approach works as hoped, it could provide a functional cure for HIV, meaning it could suppress HIV enough that patients would no longer need to take daily antiviral pills for the rest of their lives."

In an earlier study, Sacha and colleagues found leronlimab completely prevented nonhuman primates from being infected with the monkey form of HIV. That result indicated leronlimab held promise as a potential pre-exposure drug to prevent human infection from the virus that causes AIDS.

Now, this study aims to design a way to offer leronlimab as gene therapy. Sacha and colleagues will explore how to contain the coding sequence of the experimental drug inside a lab-made form of the adeno-associated virus, an approach that gene therapy researchers call an AAV vector. The resulting therapy would then be injected inside the body where muscle cells would make leronlimab long term.

Leronlimab is a monoclonal antibody that blocks HIV from entering immune cells through a surface protein called CCR5. The drug has demonstrated it can mimic a CCR5-deficient donor by occupying all available CCR5 molecules, but this would require a new method for delivery as a gene therapy. Viral vectors have been used to deliver antigens from specific pathogens for decades.

In this project, researchers will design a synthetic AAV vector to enable the long-term production  leronlimab inside the body. The goal is to develop a safe and effective single injection that suppresses HIV replication and eliminates the need for life-long antiretroviral therapy.

Rhesus macaques at OHSU’s Oregon National Primate Research Center that have been exposed to a monkey version of HIV will be given a single AAV injection that contains leronlimab. Researchers will  monitor the nonhuman primates for years to assess the safety and efficacy of this approach.

In our interest of ensuring the integrity of our research and as part of our commitment to public transparency, OHSU actively regulates, tracks and manages relationships that our researchers may hold with entities outside of OHSU. In regard to this research, Dr. Sacha has a significant financial interest in CytoDyn, a company that may have a commercial interest in the results of this research and technology. Review details of OHSU's conflict of interest program to find out more about how we manage these business relationships.

All research involving animal subjects at OHSU must be reviewed and approved by the university’s Institutional Animal Care and Use Committee (IACUC). The IACUC’s priority is to ensure the health and safety of animal research subjects. The IACUC also reviews procedures to ensure the health and safety of the people who work with the animals. No live animal work may be conducted at OHSU without IACUC approval.

Jonah Sacha, Ph.D., has been awarded a new grant to study another potential use for the monoclonal antibody leronlimab: protect babies from becoming infected with HIV while breastfeeding.

Mothers who have HIV can pass the virus onto their children while breastfeeding. For this new study, Sacha and his OHSU colleagues will give a single injection of an experimental gene therapy to infant rhesus macaques. If it works as the research team hopes, the injection could enable muscle cells in young nonhuman primates to make leronlimab, which could then protect them from getting infected with the monkey form of HIV.

The research aims to identify a new way to prevent mothers from passing on HIV to their babies. Currently, health providers typically treat infants who breastfeed from HIV-positive mothers with antiretroviral therapy, a personalized regimen of multiple drugs taken daily.

However, this drug cocktail can have many negative side effects; involves making special liquid formulations for babies; and could have long-term consequences for development. Preventing HIV infection in newborns with a single injection could be particularly helpful in resource-poor countries, where taking multiple medications daily can be exceptionally challenging.

In July 2022, the National Institutes of Health’s National Institute of Allergy and Infectious Diseases awarded OHSU a grant (R21AI70547) of about $450,000 over two years for Sacha and colleagues to initially explore this experimental therapy’s potential.