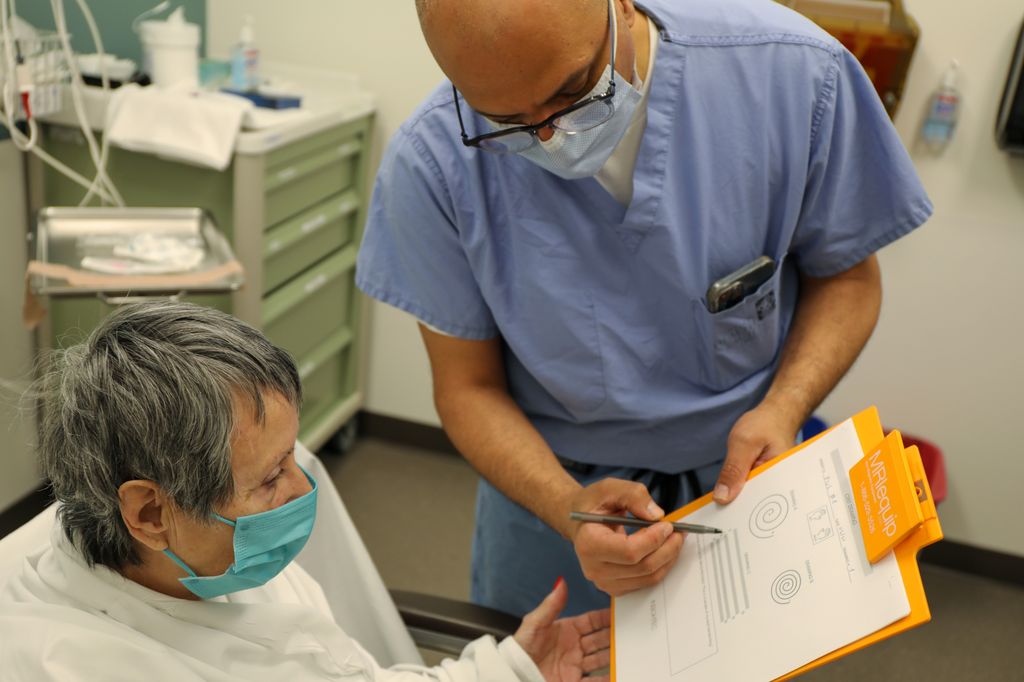 OHSU ranked among top hospitals in cutting-edge care, such as focused ultrasound neurosurgery. Ahmed Raslan, M.D., goes over the series of tests neurosurgery patient Jean Henderson will perform before, during, and after the high frequency ultrasound surgery on Wednesday, March 30, 2022. (OHSU/Christine Torres Hicks)

Oregon Health & Science University once again ranks first among the best hospitals in Oregon, according to U.S. News & World Report’s Best Hospitals 2022-23. Additionally, six of the hospital’s adult specialties are ranked among the top 50 nationwide.

The ranking follows U.S. News’ recognition, announced June 14, of OHSU Doernbecher Children’s Hospital as the one of the top children’s hospitals in the country.

“Despite unprecedented economic and health challenges stemming from the COVID-19 pandemic, these rankings reflect the dedication, hard work and talent that OHSU’s faculty and staff deliver to the people of Oregon day in and day out,” said John Hunter, M.D., FACS, executive vice president and chief executive officer of OHSU Health. “Our people make the difference in improving the health and well-being of Oregonians who rely on the state’s academic health center to deliver the most complex care with compassion and professionalism.”

Keeping compassion and care at the forefront

OHSU serves as a backstop for patients across the region for high-level trauma, the rarest types of disease and cutting-edge treatment.

Jean Henderson is a case in point.

On March 30, the 73-year-old Madras resident became the first patient in Oregon to undergo focused ultrasound for treatment of essential tremor. The procedure used high-frequency sound waves to create a small lesion in her brain, instantaneously relieving uncontrollable tremor that had prevented her from so much as signing her name or eating with a fork.

Today, she’s tremor-free and has her life back.

Yet what stands out most for Henderson that day is the simple act of a resident neurosurgeon holding her hand and calming her nerves.

“It was very, very, very good,” she said. “Everyone was wonderful. The doctors, the staff. They all helped me so much.”

“We were very impressed with all the help that we got,” he said. “The people who met us at the hospital, the whole team was so supportive. It was a totally pleasant, calming experience. What more can anyone ask for?”

The Best Hospitals rankings, which have appeared annually since 1990, are designed to assist patients and their clinicians in making informed decisions about where to receive care for challenging health conditions or for common elective procedures.

OHSU adult specialties ranked among the nation’s top 50 include:

U.S. News also rates hospitals on how well they treat patients 65 and older for certain common adult procedures and conditions. The magazine rated OHSU as high-performing in treating:

Previous Story Double dose of Plan B is not effective in preventing pregnancy for higher BMIs Next Story Heat prompts warning to stay cool, refrain from unnecessary exertion

New treatment for tremors: Cutting-edge brain surgery with no cutting