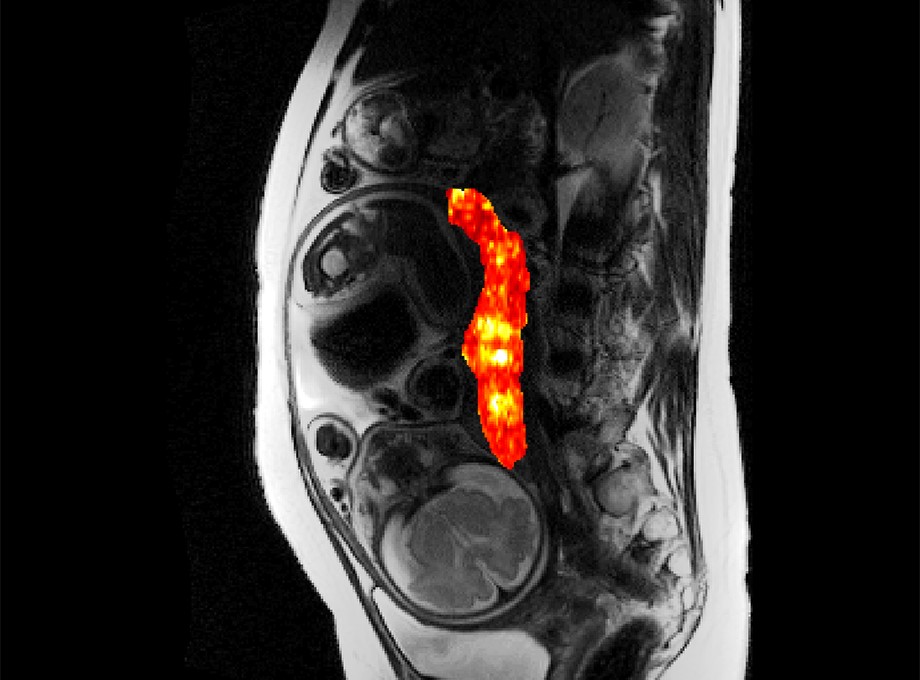 A study led by OHSU researchers published in PLOS One demonstrates the potential of quantitative T2* mapping during pregnancy to identify increased risk for adverse obstetric outcome due to placental dysfunction. (OHSU)

Oregon Health & Science University researchers have developed a new imaging method to measure the health of a placenta, which could help clinicians identify complications early in a pregnancy.

The study, published this month in the journal PLOS One, used magnetic resonance imaging, commonly known as MRIs, and could be replicated on virtually all modern MRI scanners. With quick data analysis, researchers noted that the imaging method could be easily adopted by clinicians.

“Any research that helps us find ways to improve prenatal care is crucial,” said Victoria HJ Roberts, Ph.D., research associate professor in the Division of Developmental and Reproductive Sciences at OHSU’s Oregon National Primate Research Center, who co-led the study. “Pregnancy can be extremely taxing, both emotionally and physically, especially for someone who is experiencing a complicated pregnancy. It’s exciting that this research has identified a more effective way to detect complications early in pregnancy, so clinicians are able to provide the best care to the mother and developing baby.”

The placenta plays a key role in fetal development and pregnancy morbidity, as well as neonatal, pediatric and even lifelong health. As the primary source of oxygen and nutrients for a developing fetus, abnormal placental development can be dangerous and has been linked to many adverse outcomes, including abnormalities in fetal growth, preeclampsia, which is the development of high blood pressure during pregnancy, preterm labor and stillbirth. The placenta is a dynamic organ that evolves over the course of pregnancy to support fetal development, so poor placental function early in pregnancy can become an ongoing and increasing health concern both to mother and baby.

Despite the detrimental impact of abnormal placental development, existing methods for evaluating placental function are often ineffective and limited in their ability to reliably detect risks during pregnancy. In prenatal care settings, most clinicians rely on ultrasound to take measurements of fetal growth and blood flow, but this method is limited in scope.

In 2014, the National Institutes of Health, recognizing the importance of placental research, launched the Human Placenta Project, or HPP, initiative. The overall goal of the HPP was to develop ways to assess the placenta and improve understanding of its development and function across pregnancy. In 2015, OHSU received two major funding awards from the NIH HPP.

Roberts’ team of OHSU researchers, which she co-led with Antonio Frias, M.D., professor of obstetrics and gynecology in the OHSU School of Medicine, conducted a study to explore how an MRI could be used to give clinicians a more detailed look at placental health than the traditional ultrasound provides, and to better understand an MRI’s effectiveness in detecting placental abnormalities during pregnancy. Their ultimate goal is to reduce fetal and maternal complications associated with placental dysfunction.

The study gathered data from 316 pregnant women across two sites, OHSU and the University of Utah Health Services Center, and included individuals considered both low-risk and high-risk for pregnancy complications.

The OHSU research team developed and validated an MRI protocol that detects a signal in the blood that is linked to oxygen content. This readout is known as T2*, and T2* values provide key information about oxygen availability and placental blood flow. Oxygen is key for fetal growth and development, so if these values deviate from the normal range, it suggests that something might be wrong. T2* values outside of the normal range could indicate an issue related to the maternal blood supply of oxygen, compromised placental transport or fetal utilization of oxygen.

The study first established a baseline to determine what occurs throughout the course of an uncomplicated pregnancy. Participants underwent three MRI studies during weeks 10 through 40 of pregnancy. Researchers then looked at the ability of MRI to successfully identify complications in pregnancy using the T2* readings produced from the procedures.

The study results suggest that even data from early on in pregnancy — 10 to 20 weeks — can be effective in the identification of at-risk pregnancies. Additionally, the MRIs in the study were performed using the imaging protocol developed by the OHSU team that could be implemented on virtually all modern MRI scanners, and data analysis is quick to perform, indicating that this method may be easily adopted and expanded for use across prenatal health care settings.

A study led by OHSU researchers published in PLOS One demonstrates the potential of quantitative T2* mapping during pregnancy to identify increased risk for adverse obstetric outcome due to placental dysfunction. (OHSU)