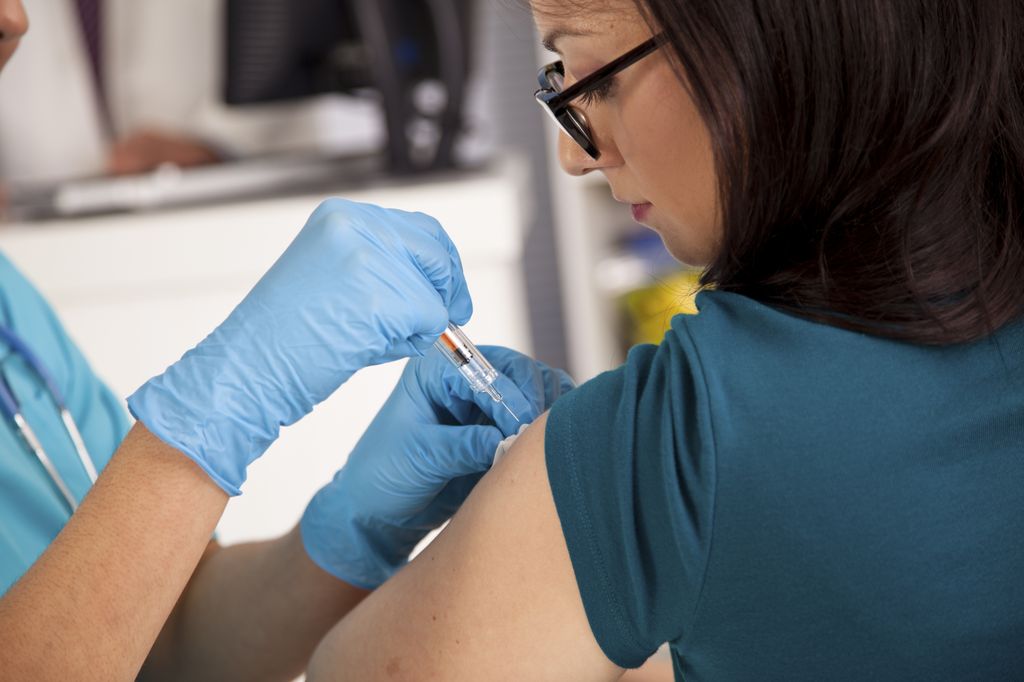 An analysis by OHSU researchers shows adults will remain protected against tetanus and diphtheria for at least 30 years without the need for further booster shots, after completing the standard five-dose childhood vaccination series. (OHSU)

Researchers at Oregon Health & Science University are challenging the convention that tetanus and diphtheria vaccine boosters need to be administered every 10 years. Their paper in Clinical Infectious Diseases recommends that the current adult vaccination schedule should be revisited.

“We have always been told to get a tetanus shot every 10 years, but actually, there is very little data to prove or disprove that timeline,” says Mark K. Slifka, Ph.D., a professor at the Oregon National Primate Research Center at OHSU. “When we looked at the levels of immunity among 546 adults, we realized that antibody titers against tetanus and diphtheria lasted much longer then previously believed.”

In this study, Slifka and colleagues looked at the magnitude and duration of immunity to tetanus and diphtheria to provide an evidence-based evaluation of the current adult vaccine schedule. Their analysis shows adults will remain protected against tetanus and diphtheria for at least 30 years without the need for further booster shots, after completing the standard five-dose childhood vaccination series.

If a revised adult vaccination schedule were implemented, the authors believe that a simplified age-based vaccination plan could be designed to involve a single vaccination at age 30 and again at age 60.

“If you ask around, you often find that it is hard for people to remember if they had their last tetanus shot eight years ago or even 11 years ago,” says Slifka. “If we were to use a simple age-based system, people would only have to remember to get their shots when they turn 30 and again when they turn 60.”

The idea of changing our vaccination schedule is not as radical as it sounds, the authors note. Other countries, including the United Kingdom, recommend no adult booster shots – and the World Health Organization recommends only a single adult booster vaccination at the time of first pregnancy or during military service. In other words, if the U.S. switched from a 10-year schedule to a 30-year schedule, this approach would still be more conservative than other countries while reducing the number of potentially unnecessary vaccinations.

Modification of the adult vaccination schedule could also have a substantial impact on U.S. health care costs, the authors suggest. Based on the number of adults who get booster shots within the recommended 10-year interval, they estimate that changing to a 30-year schedule would reduce the costs of vaccination by two-thirds, a reduction of approximately $280 million per year in health care costs, and approximately $1 billion in cost savings within four years.

Vaccination against tetanus and diphtheria has resulted in a significant decline in the incidence of these two serious diseases. Deaths attributable to tetanus have declined 99 percent since the prevaccine era, and diphtheria is virtually nonexistent in the U.S.

“Over the last decade, we have seen that mainly recent immigrants or older people who did not receive at least three doses of the tetanus vaccine are the ones at highest risk for a fatal case of tetanus,” said Slifka, “Even with this in mind, the odds of dying from tetanus in the U.S. are approximately 1 in 100 million.” Diphtheria is even more rare, Slifka noted. “There have been only 5 cases of diphtheria reported in the U.S. in the last 15 years. Believe it or not, there are actually more cases of anthrax reported each year than diphtheria.”

Together, these numbers indicate that tetanus and diphtheria vaccines are working well, but continued vigilance is still needed. “We need to make sure our kids get all of their recommended vaccinations. I can’t emphasize this enough. Only by getting the complete childhood series will these children grow into adults who will maintain strong vaccine-mediated protection against these important diseases.”

So when can we switch to a 30-year booster schedule? “This must be reviewed and approved by the Advisory Committee on Immunization Practices, the group responsible for determining the vaccination schedules in the U.S.,” says Slifka. “However, based on our results and the vaccination schedule already recommended by other countries and the World Health Organization, it might not be long before we can say goodbye to the traditional 10-year booster program.”

Patient getting a vaccine