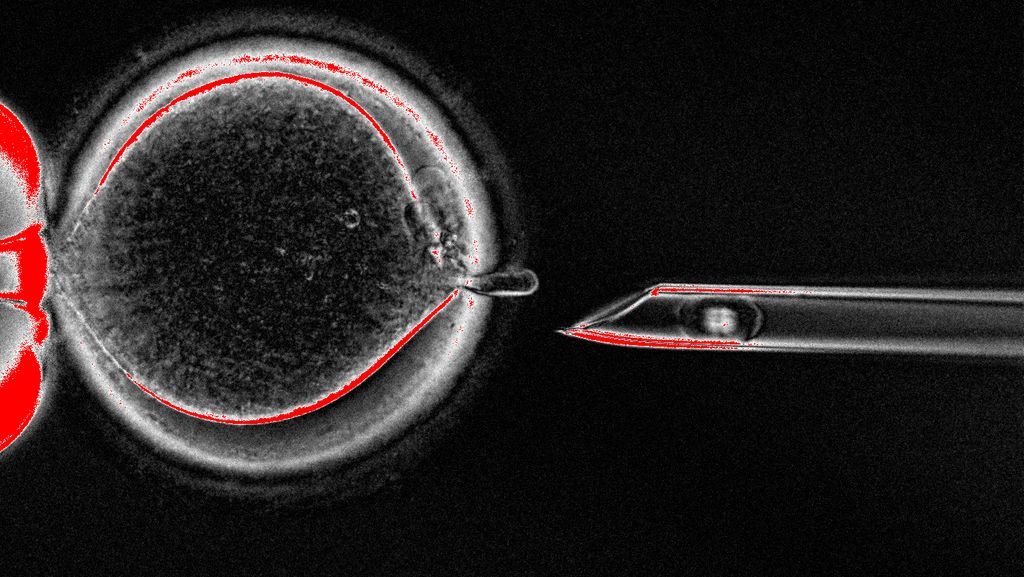 A pipette pulls out the nuclear genetic material from an unfertilized egg — a step in mitochondrial-replacement therapy. (OHSU)

A new discovery may unlock the answer to a vexing scientific question: How to conduct mitochondrial replacement therapy, a new gene-therapy technique, in such a way that safely prevents the transmission of harmful mitochondrial gene mutations from mothers to their children.

A study published today in the journal Nature suggests that clinicians select egg donors whose mitochondrial DNA (mtDNA) is compatible to the mother’s ancestral mitochondria. Similar groups of mitochondrial DNA are known as haplotypes, each of which represents major branching points on the human genetic family tree.

“This research suggests that we’re going to have the greatest success rates for producing an embryo free of disease-causing genetic mutations by making sure we are using the right combination of haplotypes,” said senior author Shoukhrat Mitalipov, Ph.D., who directs the Center for Embryonic Cell and Gene Therapy at OHSU.

Mitochondrial replacement therapy, which has been approved for clinical trials in the United Kingdom, involves swapping faulty mitochondria for those of a healthy donor. Mitalipov previously pioneered the spindle-transfer technique, in which the nucleus – or spindle – of a mother’s egg is transferred into a donor egg stripped of its nucleus. Mitalipov successfully demonstrated this technique with rhesus macaque monkeys in 2009.Mitochondrial replacement therapy offers hope for women genetically predisposed to pass on mutant mitochondria, the tiny powerhouses inside nearly every cell of the body. Mitochondrial DNA is passed only from mothers to their children. Mutations can cause a range of potentially fatal disorders affecting organs with high-energy demands such as the heart, muscle and brain.

Yet even a small amount of mutant mitochondrial DNA carried over with the mother’s nucleus can replicate quickly as the embryo develops – possibly causing the disease that the therapy was designed to prevent. Today’s study suggests a way to prevent mothers from passing on mutant mitochondria.

Mitalipov and colleagues recruited four families who have children suffering from Leigh Syndrome and one with a neurodegenerative disorder called MELAS. They also collected donor eggs from 11 healthy women, screened to confirm that they did not carry inherited pathogenic mutations in their mtDNA.

Spindles from carrier eggs were transferred into 36 donor eggs stripped of their nuclei, fertilized and cultured to blastocysts, and subsequently to embryonic stem cell lines. Most developed with the donor’s healthy mitochondrial DNA continuing to dominate. However, a few stem cell lines displayed gradual return to the maternal mtDNA. As those stem cell lines continued to grow in the laboratory, they reverted completely to the original maternal mitochondrial DNA.

Scientists wanted to find out why.

“Currently, there is a lack of studies on the efficacy and safety of oocytes derived from women carrying pathogenic mtDNA mutations,” said co-author Juan Carlos Izpisua Belmonte, Ph.D., with the Salk Institute for Biological Studies in La Jolla, California. “Our study fills the gap.”

Researchers zeroed in on a portion of the mtDNA known as the D-loop, which initiates replication of the entire genetic sequence. There they discovered DNA code polymorphisms that result in preferential replication of the mother’s mtDNA. In addition, some maternal mtDNA haplotypes give host cells a faster growth advantage. Researchers are proposing donor mtDNA matching criteria to avoid a return of mutant mitochondria in order to safely move mitochondrial replacement therapy into clinical trials.

“Our research has suggested a plausible cause of preferential replication of specific mtDNA haplotypes that should enable us to zero in on ways to identify better matches between donors and recipients,” said co-author Dmitry Temiakov, Ph.D., with the Rowan University School of Osteopathic Medicine in Stratford, New Jersey.

A pipette pulls out the nuclear genetic material from an unfertilized egg –a key step in mitochondrial replacement therapy. The nucleus, or spindle, is visible in the pipette. (OHSU)