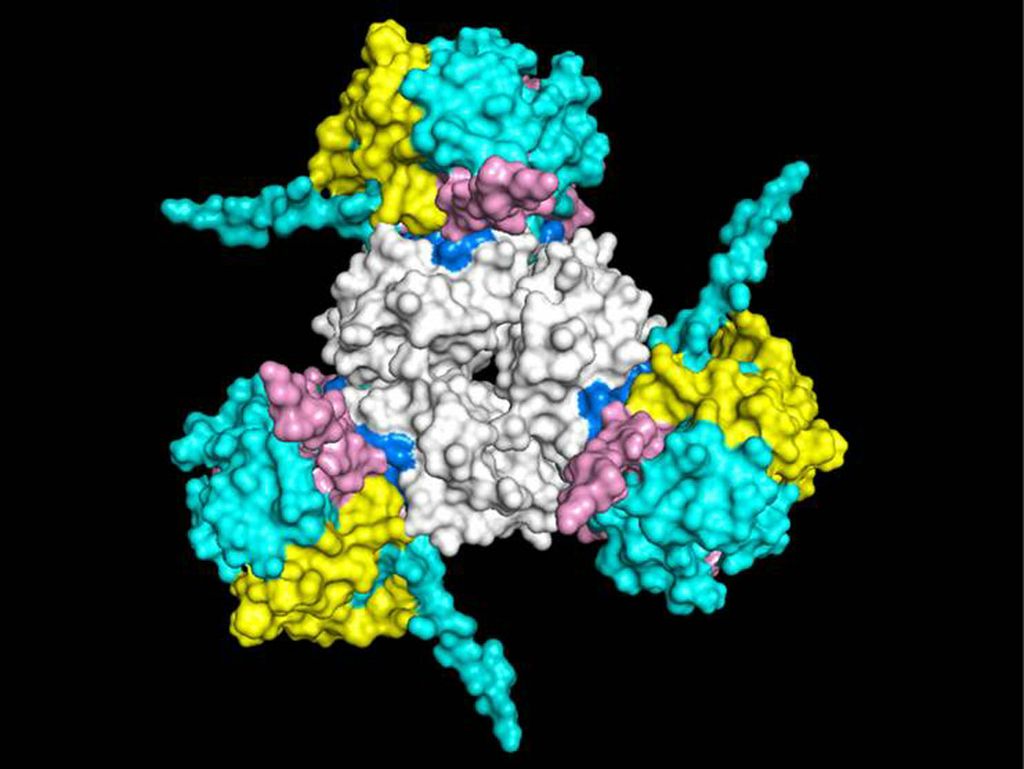 Scientists have determined that the two cytokines, macrophage migration inhibitory factor (MIF) and its twin, D-DT are thought to influence the development of progressive MS. This illustration shows the predicted binding interaction between MIF (center) and three DC74 molecules. (OHSU)

Scientists have uncovered two related cytokines and associated genetic markers that may explain why some people develop progressive multiple sclerosis, or MS. The study, led by researchers at OHSU in Portland, Oregon, and Yale University, point the way toward developing the first-ever treatment to prevent progressive forms of the disease.

The research was published today in the Proceedings of the National Academy of Sciences.

Researchers identified a cytokine, called macrophage migration inhibitory factor, or MIF, along with its homolog protein D-dopachrome tautomerase, or D-DT, that are associated with progressive MS. Cytokines are a type of protein that are important in signaling between cells in the body. These particular cytokines can worsen the disease by increasing inflammation within the central nervous system. Researchers also identified two genetic markers that enhance expression of MIF, and D-DT, that occurred more frequently in MS patients with progressive disease, particularly in men.

These findings suggest that a simple genetic test could be used to identify MS patients at risk of developing the more severe form of the disease. Even better, researchers are already developing a medication to stop the disease in its tracks.

“If you start a therapy before the disease has progressed very far, you may be able to slow it or stop it,” said co-senior author Arthur Vandenbark, Ph.D., a professor of neurology and molecular microbiology and immunology in the OHSU School of Medicine and a senior research career scientist at the VA Portland Medical Center. “We now have a target for slowing or preventing the transition from relapsing-remitting to progressive MS, a stage of MS which is much more severe.”

Scientists made the discovery through the observation of 117 participants with MS along with DNA analysis of plasma samples. In addition, researchers determined in laboratory studies that a therapeutic medication previously developed to successfully treat MS-like disease progression in rodents could block functional activities of both MIF and D-DT.

The genetic markers for high MIF expression are especially prevalent among men, who disproportionately suffer from the more severe progressive form of MS.

“This is the first real glimmer of insight into why men are more likely to develop severe progressive MS than women, even though women are three times more likely to get MS,” said co-author Dennis Bourdette, M.D., professor and chair of neurology in the OHSU School of Medicine.

Researchers say the finding may open the door to the use of precision medicine for preventing and treating the progressive form of multiple sclerosis. Although there are 14 FDA-approved therapies for the remitting-relapsing form of MS, there is only one modestly effective treatment for progressive MS.

“This is really the first study that identifies genes and cytokines that appear to influence the development of progressive MS,” Vandenbark said.

The new paper is the result of several years of collaboration between researchers at OHSU and Yale involving immunologists, biochemists, neurologists and geneticists.

“The value of this discovery to patients is that there are now approved therapies, as well as new ones in development in the Oregon and Yale labs, that target the MIF pathway and could be directed toward progressive MS,” said co-senior author Richard Bucala, M.D., Ph.D., professor of medicine, pathology and epidemiology and public health at Yale University.

MS is a chronic condition that affects an estimated 2.3 million people worldwide. In MS, the sheath covering nerve fibers in the brain and spinal cord becomes damaged, slowing or blocking electrical signals from the brain reaching the eyes, muscles and other parts of the body.

In the interest of ensuring the integrity of our research and as part of our commitment to public transparency, OHSU and the VA Portland Health Care System actively regulate, track and manage relationships that our researchers may hold with outside entities. In regards to this research project, Arthur Vandenbark has significant interests in Artielle ImmunoTherapeutics, Inc., a company that may have a commercial interest in the results of this research and technology. Review details of OHSU's conflict of interest program to find out more about how we manage these business relationships.

The contents of the paper do not represent the views of the Department of Veterans Affairs or the United States government.