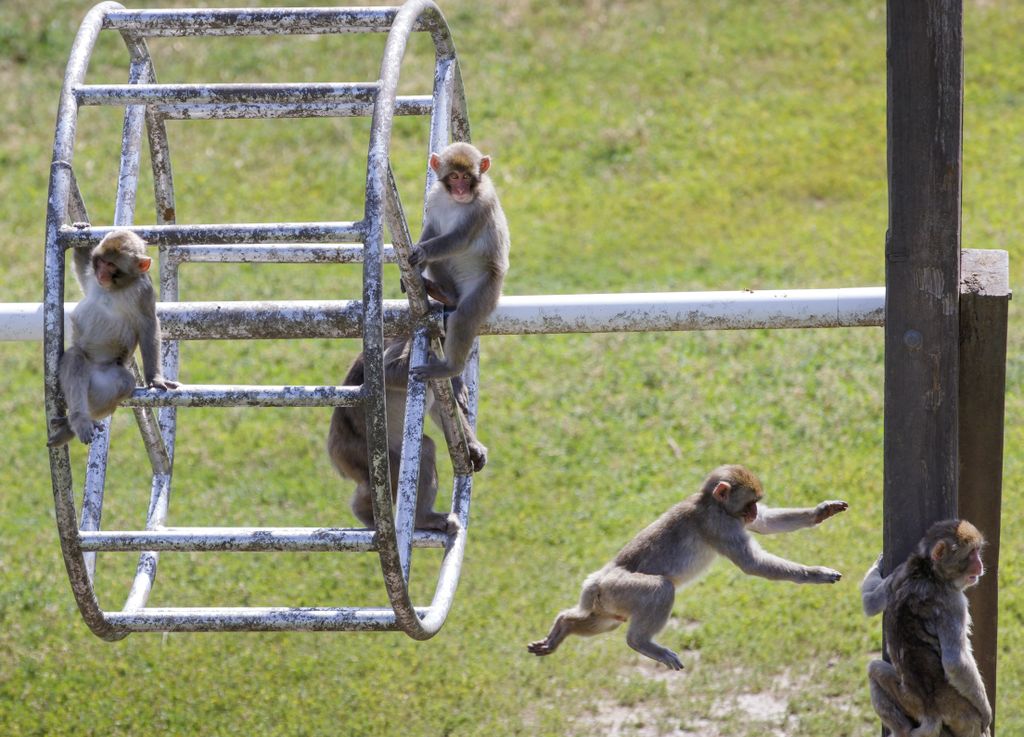 OHSU scientists have discovered a naturally occurring disease in monkeys that mimics a deadly childhood neurodegenerative disorder in people – a finding that holds promise for developing new gene therapies to treat Batten disease.

The study published online this week in the journal Neurobiology of Disease.

A multidisciplinary team of veterinarians and scientists at the Oregon National Primate Research Center made the discovery, and confirmed through genetic analysis that a small population of Japanese macaque monkeys carry a mutation in the CLN7 gene that causes one form of the disease. It’s the only known model for the disease among non-human primates in the world.

“This has truly been a collaborative effort, bringing together the expertise of clinical veterinarians and pathologists, as well as scientists with collective expertise in primate behavior, genetics as well as brain and retinal degeneration,” said Anne Lewis, D.V.M., Ph.D., head of pathology at the primate center and senior author on the publication.

Batten disease is the common name for a broad class of rare, fatal and inherited disorders of the nervous system known as neuronal ceroid lipofuscinosis, or NCLs, according to the National Institutes of Health. NCLs are responsible for the majority of neurodegenerative brain diseases that affect children.

The disease, which afflicts an estimated 2 to 4 of every 100,000 children in the United States, affects the function of organelles within cells called lysosomes, which normally break down waste products much like a cellular garbage disposal. But when the CLN7 gene is mutated, lysosomes produce a broken form of a protein involved in waste disposal. This causes a buildup of “junk” material in lysosomes, which eventually leads cells to become sick and degenerate.

Most forms of the disease begin in childhood and common symptoms include vision loss, seizures, difficulty with speech and motor skills, slowed learning and personality changes. Eventually, children with Batten disease become blind, wheelchair-bound, bedridden, unable to communicate and lose the majority of their cognitive functions. Affected children typically succumb to this fatal disease in their teens.

“This disease really affects the entire brain, with the cerebellum and cortex showing particular vulnerability,” said Jodi McBride, Ph.D., assistant professor of neuroscience at the primate center. McBride is the lead author on the new study.

Clinical trials for people on the horizon

Co-author Trevor McGill, Ph.D., research assistant professor of ophthalmology in the OHSU School of Medicine, added scientists are acutely aware of the stakes. He said the discovery of a naturally occurring model of the disease in non-human primates, combined with new advancements in gene therapy techniques, will accelerate the development of new gene therapies for Batten disease. He estimated human clinical trials could possibly occur within the next five years.

“It affects small children and it’s fatal,” McGill said, “and we’ve got the necessary tools in hand here at OHSU to fix it.”

Previous therapies for Batten disease have been tested in mice that were genetically altered with the disease-causing mutation. However, the discovery of naturally occurring disease in an animal population so a closely related to humans provides much more promising opportunities to accurately evaluate human therapies.

“The discovery of this non-human primate model of Batten disease will advance our ability to develop and test a gene therapy strategy to replace the normal version of the protein that is missing in this disease,” McBride said.

“We hope that down the road, effective treatments for children will be tested here first,” said Nathan Selden, M.D., Ph.D.,  professor and chair of neurological surgery in the OHSU School of Medicine. “One of the most powerful aspects of OHSU is the connection between basic scientists, translational scientists and clinicians.”

In 2007, an OHSU and Doernbecher Children’s Hospital team led by Selden performed the first neuronal stem cell transplants in human patients as part of a clinical trial to treat Batten disease.

“The identification and study of this model has moved along rapidly,” added co-author Betsy Ferguson, Ph.D., associate professor of molecular and medical genetics in the OHSU School of Medicine. “We’ve confirmed 12 Batten disease cases in the colony to date, four of which are young affected monkeys that will enable the development and testing of much-needed treatments for the disease. Additionally, we have identified 28 other macaques in the colony that are carriers of the mutated CLN7 gene.”

“The goal is to slow or stop the progression of the disease,” said co-author Martha Neuringer, Ph.D., research professor of neuroscience at the ONPRC. “The earlier we intervene, the better we maximize the chance to stop the disease.”

Neuringer and McGill have already begun evaluating a proof-of-concept gene-therapy strategy for Batten disease in the retina. And McBride will soon expand to noninvasive gene therapies capable of reaching the entire brain by administering the therapy into cerebral spinal fluid, the liquid that bathes the brain and spinal cord.

McBride said that this new discovery also opens up exciting avenues for developing useful biomarkers of disease progression using advanced imaging techniques such as MRI and PET scanning, both of which are available on the ONPRC campus.

“We don’t have great imaging biomarkers for this disease aside from the gold standard of MRI and so we’re also interested in using this new model to develop imaging techniques that will allow us to determine how successful we are at clearing out the buildup of cellular debris in the brain with potential treatments,” McBride said. “Being able to image lysosomal storage material in the brain would not only be useful for the CLN7 form of Batten disease, but for all of the lysosomal storage diseases in general.”

Scientists at the ONPRC said that their overall goal is to quickly develop interventional strategies that can be used to help treat the children suffering from this devastating and fatal disease.

Previous Story Study: Zika could cause more miscarriages than we realize Next Story Palliative care may reduce suicide risk in veterans with lung cancer