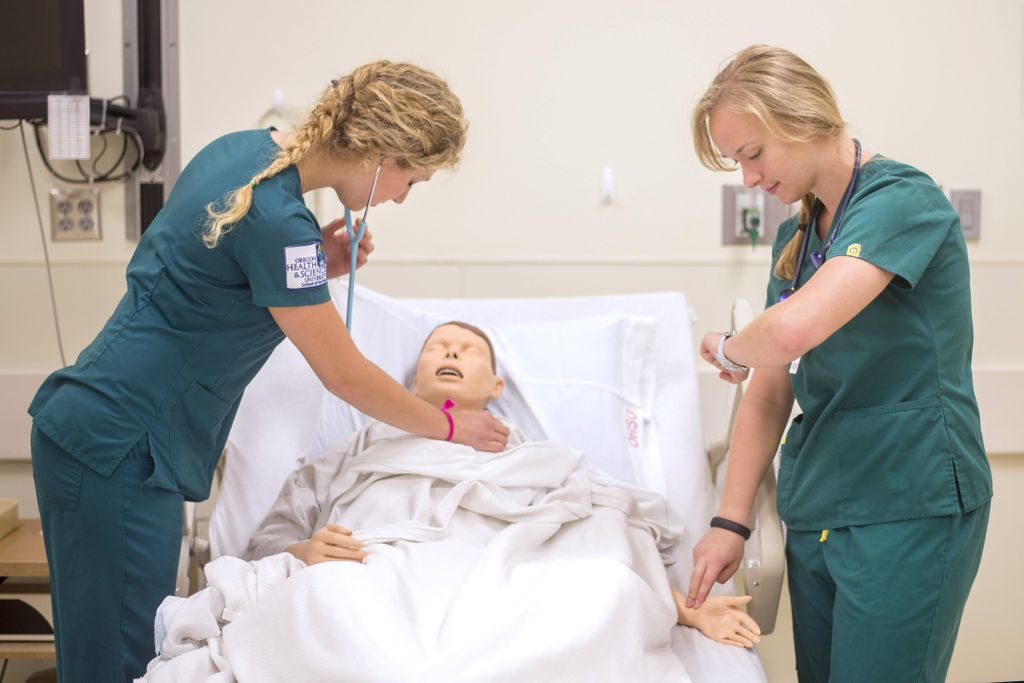 Students in the OHSU School of Nursing Monmouth's Class of 2017 practice taking vital signs in the campus' simulation lab. (OHSU)

When she dropped out of high school at 16 to care for her ill grandmother, Kelly Soto didn’t realize the experience of ushering her grandmother to medical appointments would lead to a career.

Now 29 and living in Salem, Oregon, Soto just started the second of her three years at the OHSU School of Nursing’s Monmouth campus, which is located at Western Oregon University, about 20 miles southwest of Salem. Though she juggles school with caring for her grandmother and a part-time job as a certified nurse assistant, she’s on track to earn a bachelor’s of science in nursing in 2020.

“It’s a very small, but mighty campus,” Soto says of the OHSU Monmouth nursing campus. “The professors are very knowledgeable and passionate about what they teach. I feel supported when I walk onto campus. They encourage you to keep pursuing your dream.”

Soto follows the footsteps of 238 others who have graduated from the Monmouth nursing program, which celebrates its 10th anniversary today. OHSU leaders and faculty joined current and past students of the Monmouth campus for the celebration, which included an annual white coat ceremony for the program’s 32 newest students.

The OHSU School of Nursing started its fifth campus at Monmouth in 2008 to bring more highly educated nurses to the Salem area. Nurses with a bachelor’s degree or higher are sought-after because they have more of the detailed skills and knowledge needed to better care for patients. Research has found patients treated at hospitals with more bachelor’s-level nurses have better health outcomes and lower mortality.

“The Monmouth campus has been key these past 10 years in helping the OHSU School of Nursing meet Oregon’s nursing workforce needs,” said OHSU School of Nursing Dean Susan Bakewell-Sachs, Ph.D. R.N., F.A.A.N. “We’re proud to know the education we provide at Monmouth and beyond enables our determined graduates to provide Oregonians quality and compassionate nursing care.”

Monmouth nursing graduates have gone on to work in hospitals, clinics and private practice in Salem, Corvallis, Eugene and numerous small communities in between. While in school, they also contribute to local health through clinical rotations at various healthcare institutions and research projects involving local residents with healthcare challenges and volunteering. 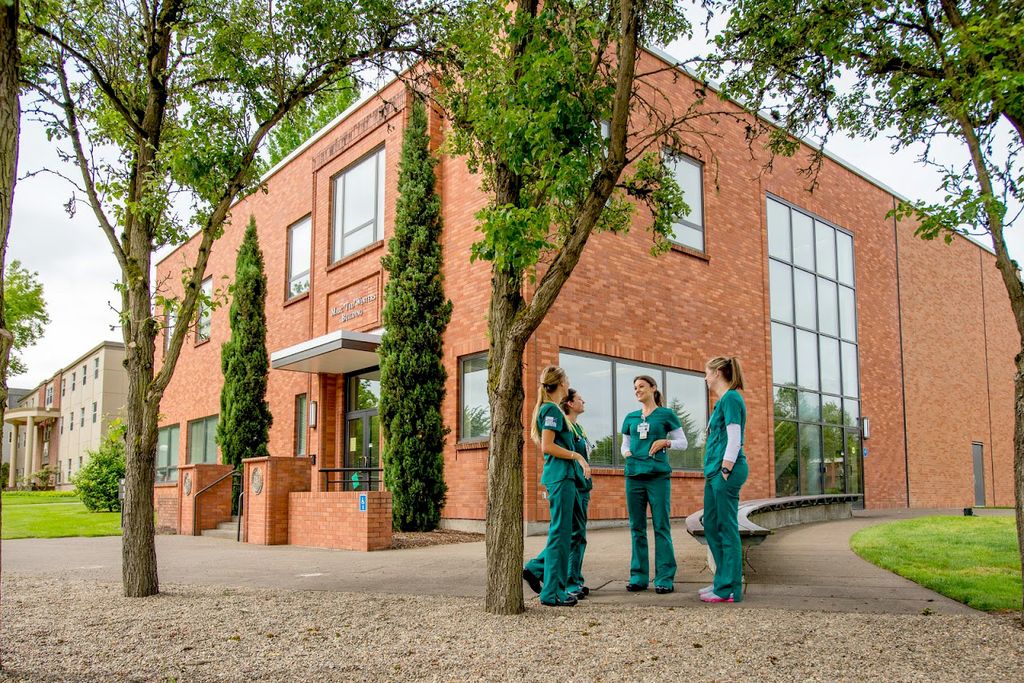 OHSU School of Nursing Monmouth students chat outside of class in front of the school's home base on the campus of Western Oregon University in Monmouth, Oregon. (OHSU)

Among the graduates Soto follows is Julia Balcom, D.N.P., F.N.P.-C., who was a member of the campus’ first graduating class in 2011. After also earning a doctorate in nursing from OHSU’s Portland campus, Balcom became a nurse practitioner at a small clinic in nearby Dallas, Oregon.

“It was a great fit,” Balcom said of her time on the OHSU Monmouth campus. “The small class size meant students got to know each other well and supported each other. There were also more opportunities for an individualized education. Each OHSU nursing campus has its unique flavor and it was an honor to help develop the Monmouth campus’ personality.”

Having grown up in a rural community near Monmouth, Balcom wanted to work in a small town. She was eager to go join the Monmouth program as the first step in her journey toward serving as a nurse practitioner close to home, where she’s passionate about helping rural residents.

“It’s really important to have access to nursing programs in more rural areas,” Balcom said. “It not only encourages locals to consider nursing as a career, but having a nursing program that’s of such high caliber also helps local students be the best possible nurses they can be.”

Soto initially thought she’d have to go to Portland to become a well-educated nurse, but was surprised to hear OHSU had a nursing program nearby. Her OHSU experience has already opened up a new opportunity she hadn’t considered before: becoming a pediatric nurse practitioner. After graduating from Monmouth, she now plans to apply for an OHSU nursing doctorate program.

“If I want to be the best nurse I can, I need the best education I can get,” Soto said.

Faculty stand with the first class at OHSU School of Nursing Monmouth, taken in the fall of 2008 as the campus opened for the first time. (OHSU)

Students in the OHSU School of Nursing Monmouth's Class of 2017 practice taking vital signs in the campus' simulation lab. (OHSU)

The members of the OHSU School of Nursing Monmouth Class of 2020 attends their white coat ceremony, which marked the beginning of their nursing education in fall 2017. (OHSU)

Julia Balcom, D.N.P., F.N.P.-C., who was a member of the first graduating class from OHSU School of Nursing’s Monmouth campus in 2011. (OHSU)

OHSU School of Nursing Monmouth students chat outside of class in front of the school's home base on the campus of Western Oregon University in Monmouth, Oregon. (OHSU)

OHSU School of Nursing Monmouth is located on the campus of Western Oregon University in Monmouth, Oregon, where it shares a building with WOU's mathematics department. (OHSU)

OHSU School of Nursing Monmouth students stand in front of the regional campus' home, which it shares with the mathematics department of Western Oregon University in Monmouth, Oregon. (OHSU)