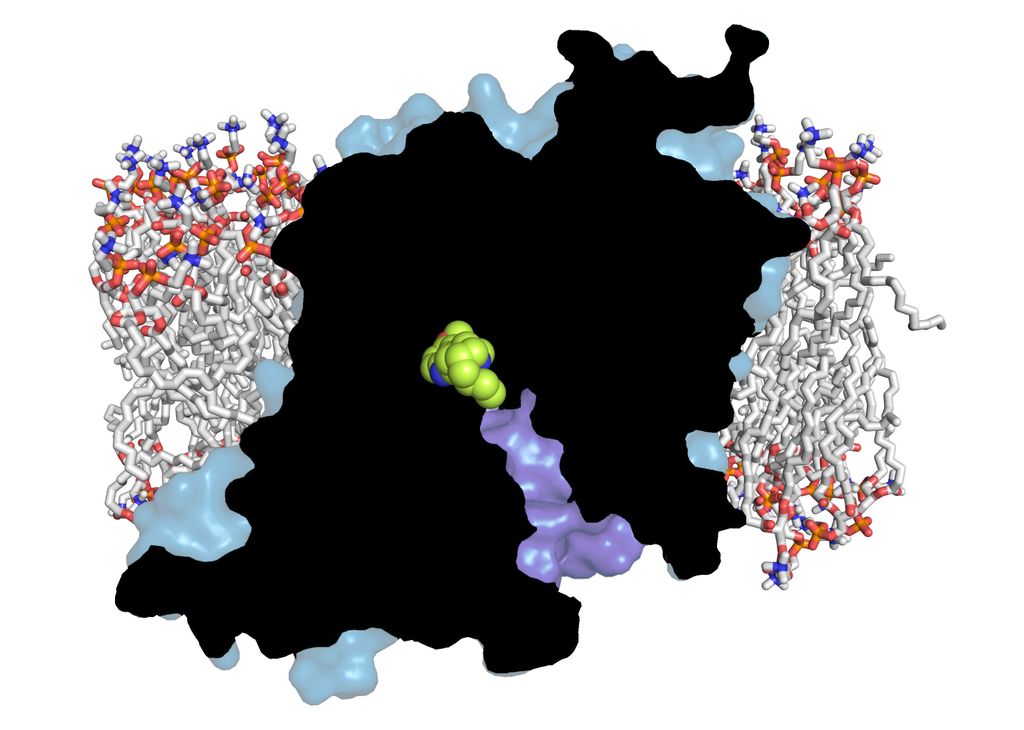 Using cryo-electron microscopy, OHSU researchers reveal the three major shapes of the serotonin transporter--a protein in the brain linked to anxiety and depression. In this image, a serotonin transporter bound with ibogaine (lime spheres), is found to have outward-open, closed and inward-open shapes. (OHSU)

Scientists used a compound found in a shrub native to Africa to reveal the three major shapes of the serotonin transporter, a protein in the brain linked to anxiety and depression.

Using cryo-electron microscopy, the scientists examined the protein binding to ibogaine, an alkaloid that alters brain function and occurs naturally in the shrub iboga. Using ibogaine, researchers reveal the structure of the serotonin transporter in its outward-open, closed and inward-open shapes.

The discovery published today in the journal Nature.

“It means we can target different states of the transporter to modulate its activity,” said senior author Eric Gouaux, Ph.D., senior scientist at the OHSU Vollum Institute in Portland, Oregon, and an investigator with the Howard Hughes Medical Institute. “It opens up new thinking of how you might come up with novel molecules to bind to the transporter.”

In describing the mechanism of how the protein works with ibogaine, co-authors said they expect the finding may open the door to developing medications that stop addiction without the hallucinogenic and other dangerous properties of ibogaine.

“There’s a real need to develop molecules that have these anti-addictive properties,” said co-lead author Jonathan Coleman, Ph.D., a researcher in the OHSU Vollum Institute.

In 2016, Gouaux led a team that first revealed the structure of the serotonin transporter, which provided new insight about how the antidepressants citalopram and paroxetine, two of the most widely prescribed selective serotonin reuptake inhibitors, or SSRIs, interact with and inhibit the transport of serotonin.

Influencing virtually all human behaviors, serotonin regulates the activity of the central nervous system as well as processes throughout the body, from cardiovascular function to digestion, body temperature, endocrinology and reproduction. The serotonin transporter acts as a molecular pump for serotonin, recycling the neurotransmitter following neuronal signaling. Serotonin shapes neurological processes including sleep, mood, cognition, pain, hunger and aggression.

The new study extends that groundbreaking work by showing the transporter’s major conformations, or shapes. The National Institute for Drug Abuse of the National Institutes of Health provided the researchers with ibogaine, which is a Schedule 1 controlled substance that’s tightly regulated under U.S. law.

“Most antidepressant drugs bind to the outward-open conformation, and our study shows ibogaine can bind to the inward state,” said co-lead author Dongxue Yang, Ph.D., a researcher in Gouaux’s lab.

Cryo-EM enables scientists to visualize molecules in near-atomic detail, however previous work has focused on relatively large proteins. This is one of the smallest molecules to be so clearly revealed through cryo-EM.

“That’s a huge development for biomedical science,” Gouaux said. “Five years ago, people would have said this was impossible.”

Using cryo-electron microscopy, OHSU researchers reveal the three major shapes of the serotonin transporter--a protein in the brain linked to anxiety and depression. In this image, a serotonin transporter bound with ibogaine (lime spheres), is found to have outward-open, closed and inward-open shapes. (OHSU)