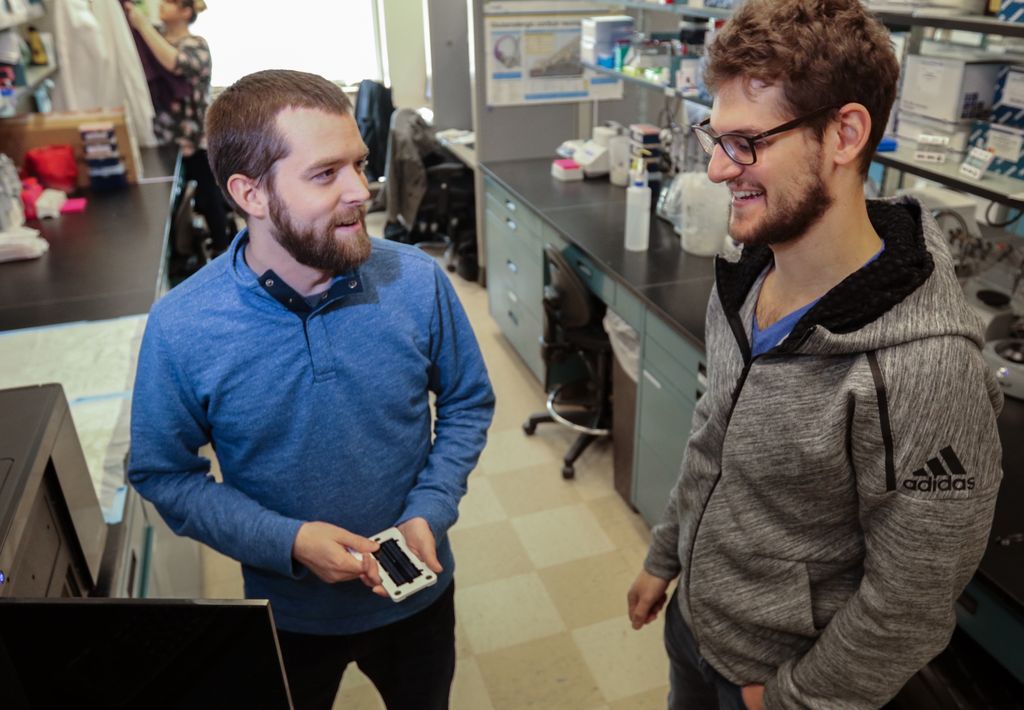 Andrew Adey is a self-described tinkerer.

“I’ve just always been interested in it, starting with Legos as a kid,” he said.

All of that tinkering has served him well. Today, he’s a leader in the field of single-cell biology and running his own lab at OHSU in Portland, Oregon, at the relatively young age of 33. He’s still tinkering, only now he’s applying his creativity toward solving the fundamental building block of life: the human cell.

“What makes a cell a cell type, and how did it get there?” said Adey, Ph.D., an assistant professor of molecular and medical genetics in the OHSU School of Medicine.

Adey is developing new methods to efficiently discern cell types within the human body. In doing so, he and his collaborators are laying the groundwork for treatments that target the unique characteristics of individual cells. Cancerous tumors are a prime example.

No two cancers are alike, so effective treatments will depend on mapping out the unique cellular mutations within the tumors of each patient.

“Every cancer patient is an ‘n’ of one,” Adey said.

In 2013, as a researcher working toward his Ph.D. at the University of Washington, Adey published a study in the journal Nature that demonstrated a high-throughput method for mapping the genomes of single cells. He did so by using the famed HeLa cell line, originally derived in 1951 from a tumor biopsied from cervical cancer patient Henrietta Lacks.

Adey has continued working on high-throughput techniques since arriving at OHSU in 2014, with about half of his research focused on neuroscience and half on cancer.

Collaboration is the key, he said.

“It’s why I came here,” he said. “The nature of the work I do necessitates close collaborations. I think it’s OHSU’s biggest strength and absolutely critical for the success I’ve had for my lab.”

Adey cultivated an early interest in organic chemistry starting as a high school student. He went on to study molecular biology at the University of Texas, where he excelled in finding creative ways to manipulate the chemical bonds of DNA molecules. At one point, he found himself running the university’s microarray facility as an undergraduate.

He’s continuing to earn accolades as a researcher, including being recognized as the recipient of the 2018 Early-Career Award from the American Society of Human Genetics.

“In a relatively short time, Dr. Adey’s research has made an impressive impact on the scientific understanding of cancer development, progression and response to treatment,” David L. Nelson, Ph.D., president of the American Society of Human Genetics, said in the announcement. “We expect his contributions to the genetics community to continue to grow and advance the field.”

Adey also was recognized last year by the Portland Business Journal as one of five health care professionals under 40 who have already made a significant impact on the field in Oregon and Southwest Washington.

The awards are nice, says Adey, but he makes it clear that he’s motivated by solving the mysteries of the human cell. So far, he said, we’ve only scratched the surface.

“We all started out as a single cell with one blueprint,” he said. “From that single cell, we’ve divided into thousands of cell types with a total of 37 trillion cells in the typical human body. How does that happen?”

Breaking the cycle of obesity