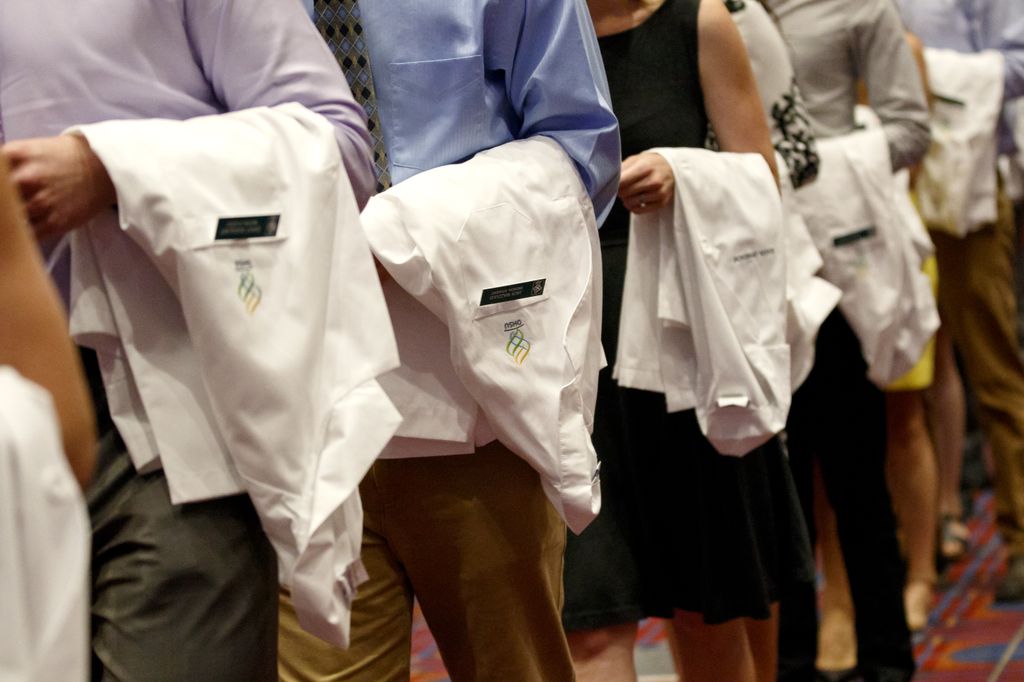 OHSU's most diverse medical class to date will don their white physicians' coats at the annual White Coat Ceremony on Friday. (OHSU/Kristyna Wentz-Graff)

The most diverse group of students to enter the OHSU School of Medicine will begin their journey toward becoming physicians on Friday, Aug. 9, by symbolically slipping on their white physicians’ coats at the school’s annual White Coat Ceremony.

“While the U.S. spends more than any other developed nation on health care, we have the worst health and health care disparities,” said Sharon Anderson, M.D., dean of the OHSU School of Medicine. “These disparities are disproportionately experienced in medically underserved communities, including rural areas and communities of color. As OHSU’s most diverse medical class yet, the OHSU M.D. Class of 2023 will become well-rounded physicians who reflect the diversity and understand the cultural context of all of our patients.”

Of the 160 medical students matriculating this fall:

DETAILS: Elizabeth P. Lahti, M.D., an assistant professor of medicine in the OHSU School of Medicine, will deliver the annual  J.S. Reinschmidt, M.D., lecture, which provides a special message to students.

Media who attend will be able to:

Nine years after fleeing her native Colombia, Johanna Wilson is returning to her long-held goal: becoming a physician.

Wilson, 32, came to Portland in 2010 after her father and family were targeted due to his involvement in a joint U.S.-Colombia effort to stop drug trafficking. She had been in her fourth year of medical school in Colombia when she came to the U.S. At the time, she figured she would return to her studies a year later after the situation back home cooled down.

But she fell in love, got married, gave birth to a daughter, and decided to pursue a career in health care here. She spent her first eight months in the U.S. learning English, followed by taking community college classes and then earning a bachelor’s degree in biology from the University of Portland.

Wilson became a medical scribe and translator, working at a Portland plastic surgery practice. She volunteered at the OHSU Emergency Department, where she brought patients warm blankets and a smile. She tried to find another path in health care, but medicine kept calling her name. Wilson’s goals are two-fold: help patients find solutions to their health challenges, and set an example for others whose disadvantaged status deters them from pursuing their dreams.

“We all have weight on our backs, and as we grow, people put labels on us,” Wilson said. “We are females, we are Latinas, we are older. I want to show my daughter that it doesn’t matter how many labels people give you. If you are productive, have fresh ideas, work hard and are smart, you can do it, too.”

Even though Kyna Lewis, 25, is a Tlingit Alaskan Native and grew up in Anchorage, she didn’t meet a Native doctor until a year ago, at OHSU.

She came to Portland last fall to participate in the OHSU Wy’east Post-Baccalaureate Pathway, a 10-month program for talented Native American students that offers an alternative to the traditional medical school admissions process. Lewis is among a total of six Natives who are starting medical school at OHSU this fall. She plans to provide compassionate, culturally competent care to other Natives.

Her journey thus far has been far from easy. In 2013, her sister was murdered shortly before Lewis had final exams in college. She rushed home to help her family for a week, but then returned to take tests. Her grades suffered. Her teenage cousin was also diagnosed with cancer in 2016. She became his guardian and simultaneously juggled helping him return to health and completing her college studies.

It took five and a half years for her to earn a bachelor’s degree in biological sciences from the University of Alaska Anchorage. Lewis applied to medical school but was rejected because she lacked experience shadowing medical providers and had a low MCAT score.

But she persisted. Lewis felt she needed to set the example that she didn’t see as a child - and help health care providers better understand Native culture so they better care for their patients. Having completed Wy’east in May, Lewis is ready to tackle medical school.

“I’m so much more confident and comfortable not only in the idea of becoming a physician, but just starting medical school,” she said. “I found a place where I actually belong. I have a community. That’s more than I could have ever hoped for.”

Previous Story Native American physician numbers could increase with new path to medicine Next Story OHSU M.D. Class of 2023 dons their white coats, 'ushering in a ‘lifetime of public service’

(Left to right) John Wilson with his wife, Johanna, OHSU School of Medicine Class of 2023, and their daughter, Mia, 2. (Photo courtesy of Johanna Wilson)