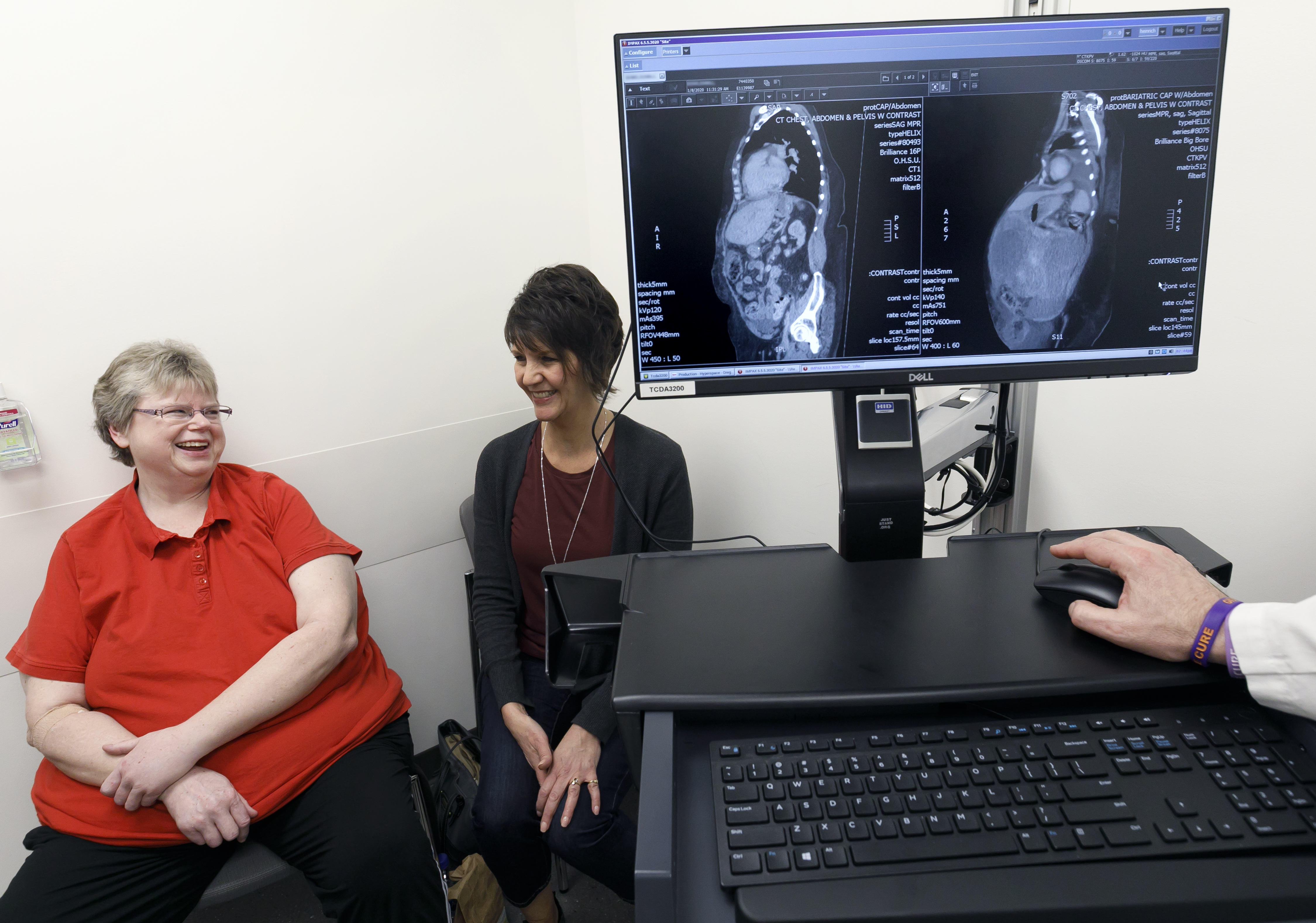 Diana Dowd, left, talks with her friend, Lauri Roskamp, as Dr. Heinrich reviews her scans. Dowd took part in a clinical trial treating a rare stomach cancer, GIST, which was recently approved by the FDA. A large tumor, more than 15 inches long, right, is visible in the before and after scans. (OHSU/Kristyna Wentz-Graff)

In 2017, 50-year-old Diana Dowd was feeling lethargic, like her body wanted to “shut down.” After a multitude of tests, including colonoscopies and endoscopies, her oncology team in Spokane, Washington, determined the source of her fatigue: a malignant mass in her stomach they determined was a rare gastrointestinal stromal tumor, also known as GIST.

Dowd’s providers went through several drugs in an effort to treat her disease, including Gleevec, a drug that revolutionized treatment for patients with a certain form of leukemia, as well as a subset of patients with GIST. As the effectiveness of each drug waned, she became sicker. Her care team then referred her to an international leader in the GIST field: Oregon Health & Science University’s Michael Heinrich, M.D.

Heinrich is a professor of medicine (hematology and medical oncology) in the OHSU Knight Cancer Institute, OHSU School of Medicine, as well as a practicing physician with the VA Portland Health System. As an internationally recognized expert in GIST, more than half the patients he sees come from out of state or other countries to see him.

“During my initial appointment around Thanksgiving in 2017, Dr. Heinrich told me ‘I think we can do something for you,’” Dowd says.

“At the time of referral, Diana’s largest tumor was 40 centimeters in length — that’s roughly the length of two bowling balls. Between her gigantic tumors and ascites [build-up of fluid in the abdomen], she could not lay in the CT scanner on her back, because she could not breathe while lying flat,” says Heinrich.

Based on the genetic make-up of her tumor, Heinrich offered the option of a clinical trial. As an investigator on the NAVIGATOR clinical trial being led by Blueprint Medicines, he believed this drug could be a solution for Dowd because her tumor tested positive for a PDGFRA exon 18 mutation. Dowd enrolled in the clinical trial and began taking the drug, then called BLU-285, or avapritinib.

Over the next few years, Dowd’s tumors slowly began to shrink. With the combined decrease in tumor mass and weight loss she experienced from decreased water retention, Dowd became eligible for surgery to remove the tumor from her stomach. In September 2019, an OHSU surgical team removed all of her tumors, with no complications. At that point, the largest tumor was found to consist of only dead tissue. 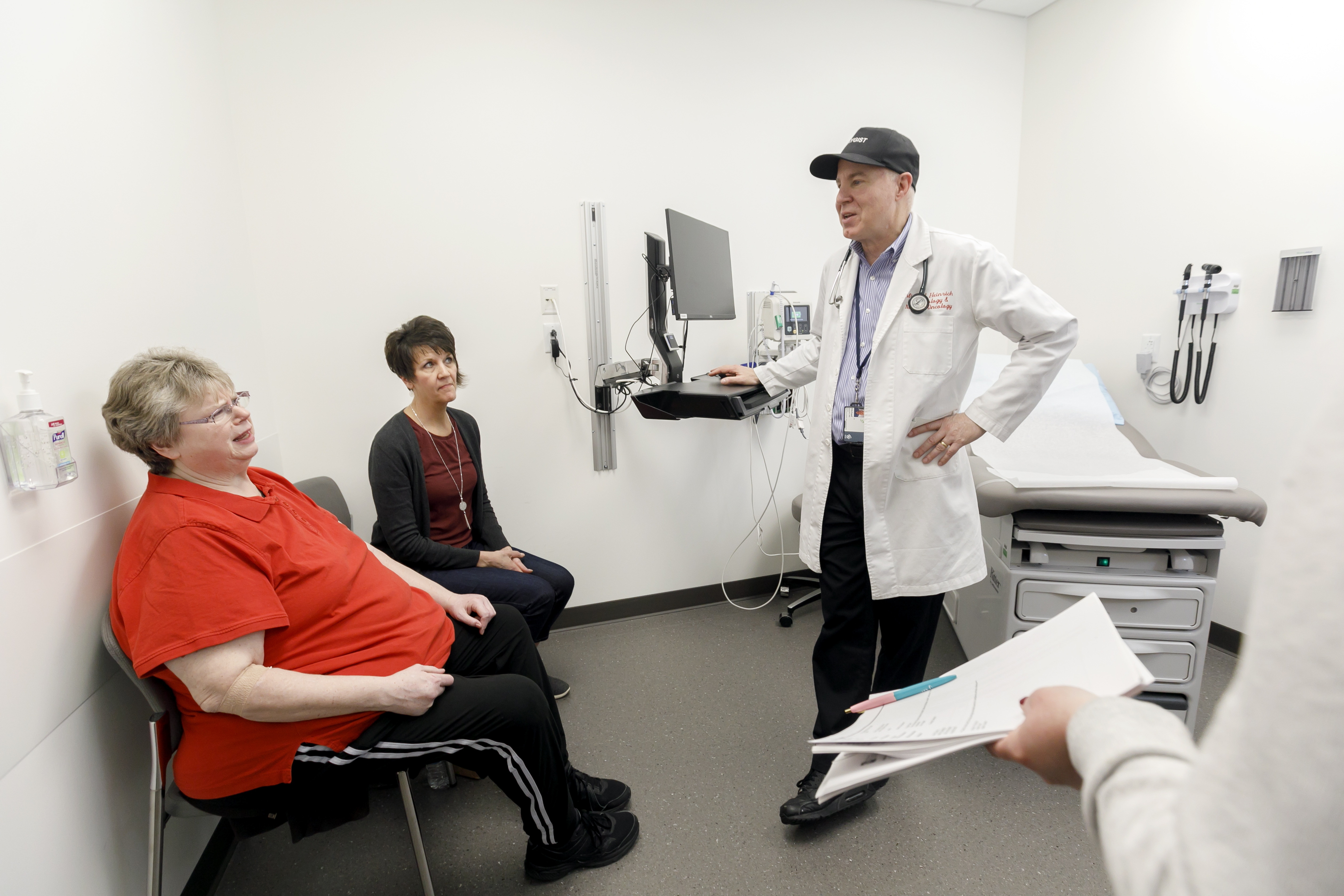 The FDA granted full approval for AYVAKIT, based on results from the clinical trial that Dowd participated in. (OHSU/Kristyna Wentz-Graff)

In laymen’s terms, Heinrich says, this means “a type of GIST that previously has not responded to any available treatments.”

The FDA granted full approval for AYVAKIT, based on efficacy results from the Phase 1 NAVIGATOR clinical trial -- the trial Dowd was enrolled in -- as well as combined safety results from multiple clinical trials for avapritinib. In patients with PDGFRA exon 18 mutant GIST, AYVAKIT had an overall response rate (ORR) of 84%.

Under Heinrich’s leadership, OHSU enrolled more participants in the Phase I trial than any other center in the world.

“Diana has had a dramatic response in her tumors — some are no longer detectable — and marked improvement in her functional status to where she can live independently, go to the store, walk around, and feels 100% better,” says Heinrich. “The approval of AYVAKIT brings forward a new standard of care for patients like Diana with PDGFRA exon 18 mutant GIST, a genomically defined population that previously had very limited treatment options. For the first time, we can offer these patients a highly effective treatment that targets the underlying genetic cause of their disease.”

The impact of a clinical trial

Today, Dowd is doing well and visits Heinrich and the research team just once every three months to monitor for tumor growth. Previously, she was making the trip to OHSU much more frequently. 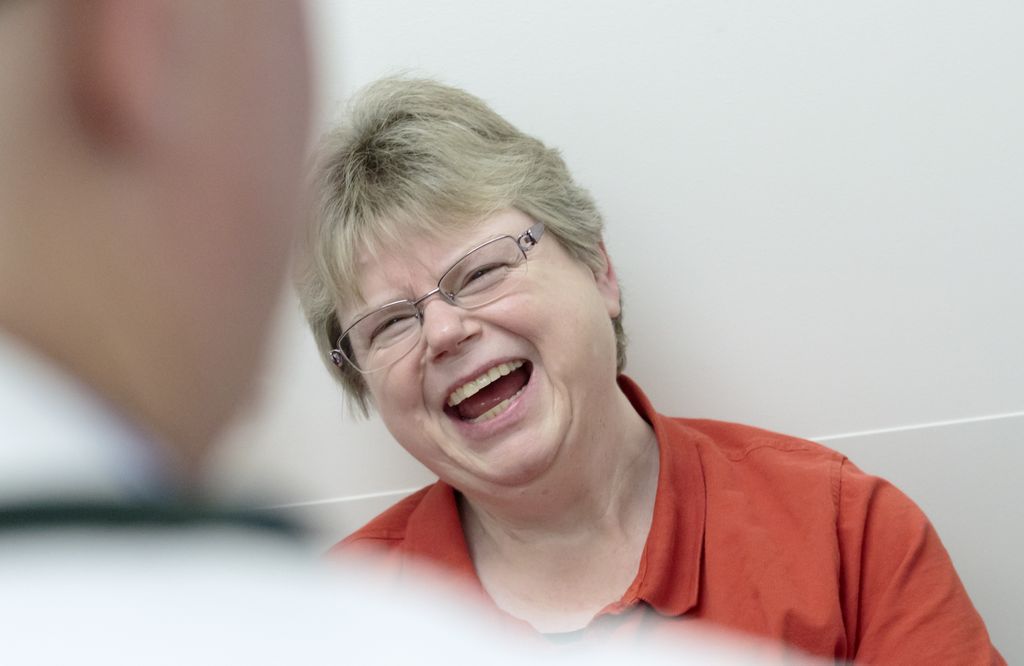 Dowd encourages patients to consider clinical trials for treatment. “My energy level is still not as high as it could be, but I’m getting there. I’m in it for the long haul.” (OHSU/Kristyna Wentz-Graff)

She encourages patients to consider a clinical trial as part of their options.

“I think it’s vital for patients to understand they have options with clinical trials,” she says. “It’s also vital to have good oncologists networking with other oncologists, like Dr. Heinrich. I’m happy there are teams out there communicating with each other.”

In addition to having a good support team and a great group of friends, Dowd says her two cats keep her busy. As does a weekly cribbage game she plays with friends: “My energy level is still not as high as it could be, but I’m getting there. I’m in it for the long haul.”

Disclosures: Heinrich has served as a consultant for Blueprint Medicines, Novartis, MolecularMD. He has received research funding from Blueprint Medicines and has provided expert testimony for Novartis. Brian Druker, M.D., director of the OHSU Knight Cancer Institute, is a scientific co-founder of Blueprint Medicines. He was not involved in this clinical trial.

Michael Heinrich, M.D., at OHSU, Jan. 8, 2020, wears a "Slay GIST" hat during an appointment with a patient. Heinrich consulted with the company that developed a drug treating a rare stomach cancer, GIST. The drug was recently approved by the FDA. (OHSU/Kristyna Wentz-Graff)

Diana Dowd, center, has an appointment with Michael Heinrich, M.D., at OHSU, Jan. 8, 2020. Dowd took part in a clinical trial for a drug treating a rare stomach cancer, GIST. The drug that recently approved by the FDA. (OHSU/Kristyna Wentz-Graff)

Michael Heinrich, M.D., left, talks with Diana Dowd, center and her friend Lauri Roskamp, during an appointment at OHSU, Jan. 8, 2020. Dowd took part in a clinical trial treating a rare stomach cancer, GIST, which was recently approved by the FDA. (OHSU/Kristyna Wentz-Graff)

Diana Dowd, center, talks with her friend, Lauri Roskamp, right, during an appointment at OHSU, Jan. 8, 2020. Dowd took part in a clinical trial treating a rare stomach cancer, GIST, which was recently approved by the FDA. The scans show a comparison of Dowd's stomach tumors after, left, and before her treatment. (OHSU/Kristyna Wentz-Graff) EDITOR'S NOTE: PERSONAL INFORMATION HAS BEEN REMOVED FROM THE XRAYS. NO OTHER CONTENT HAS BEEN MODIFIED.