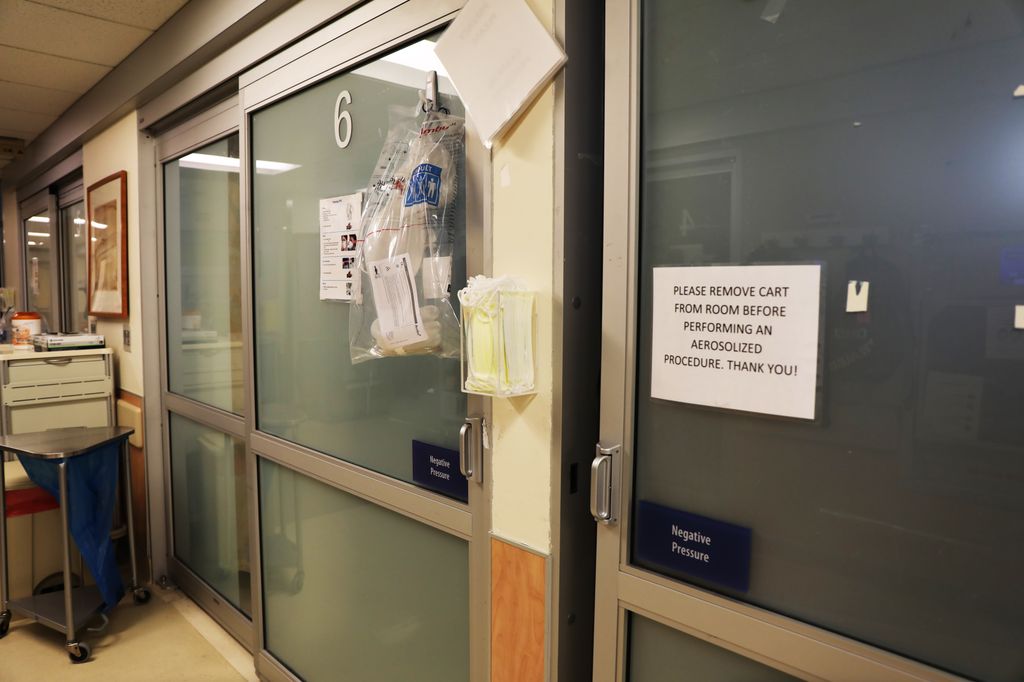 COVID-19 treatment rooms inside OHSU's emergency department on Thurs., Feb. 3, 2022. Hospitals in Oregon are still struggling to deliver timely care to everyone who needs it. (OHSU/Christine Torres Hicks)

UPDATE: This story has been updated to reflect a change made in the forecast related to the timing of the mask mandate.

The number of people hospitalized with COVID-19 has peaked and will steadily recede until reaching pre-omicron levels by the end of March, according to the latest forecast from Oregon Health & Science University.

The updated forecast also acknowledges the Oregon Health Authority’s plan to lift the indoor mask requirement in Oregon by March 31.

“It’s important for people to stick with masking through the next several weeks,” said Peter Graven, Ph.D., director of the OHSU Office of Advanced Analytics. “Even though our forecast projects light at the end of a very long tunnel, we can’t lose sight of the fact that hospitals in Oregon are still struggling to deliver timely care for everyone who needs it.”

Graven projects that if Oregon were to lift its indoor mask mandate today, hospitalizations would rise again nearly to the omicron peak: roughly 1,127 people from the 1,007 hospitalized as of Thursday, Feb. 10, according to the latest figures from the Oregon Health Authority. They would also stay high for much longer.

Hospitalizations from the omicron-fueled surge peaked at 1,130 people on Jan. 27 and have slowly begun to recede. The pandemic high for hospitalizations came on Sept. 1, 2021, when 1,178 people were hospitalized amid the surge in cases from the delta variant.

Graven credited Oregonians for acting to reduce the spread of a wildly contagious variant, which was first confirmed in Oregon on Dec. 14. Oregonians maintained relatively high rates of masking, refrained from indoor gatherings, and reduced the time they spent shopping, and in bars and restaurants.

He offered an analogy to describe the current situation.

“With masking and behaviors, we have essentially built a dam holding back a ‘reservoir’ of people who became susceptible to infection with omicron,” he said. “Right now there is a spillway that allows infections to get through at a slower rate. If we remove the dam now, it would flood. By contrast, if we let the water drain out slowly, we can safely remove the dam without flooding our hospitals with cases all at once.”

Oregon’s peak hospitalization from the omicron wave is more than one-third lower per capita than the average peak elsewhere in the U.S.

“Oregonians’ commitment to protecting themselves, their neighbors and their community is paying off,” Graven said. “It will be important to maintain that vigilance in the weeks ahead.

“We also know that the virus continues to mutate and spread, as we saw with delta and omicron,” he said. “That’s why it’s critical for people to get vaccinated and boosted so that we’re able to handle future mutations while maintaining timely access to medical care that all Oregonians expect and deserve.”

COVID-19 treatment rooms inside OHSU's emergency department on Thurs., Feb. 3, 2022. Hospitals in Oregon are still struggling to deliver timely care to everyone who needs it. (OHSU/Christine Torres Hicks)