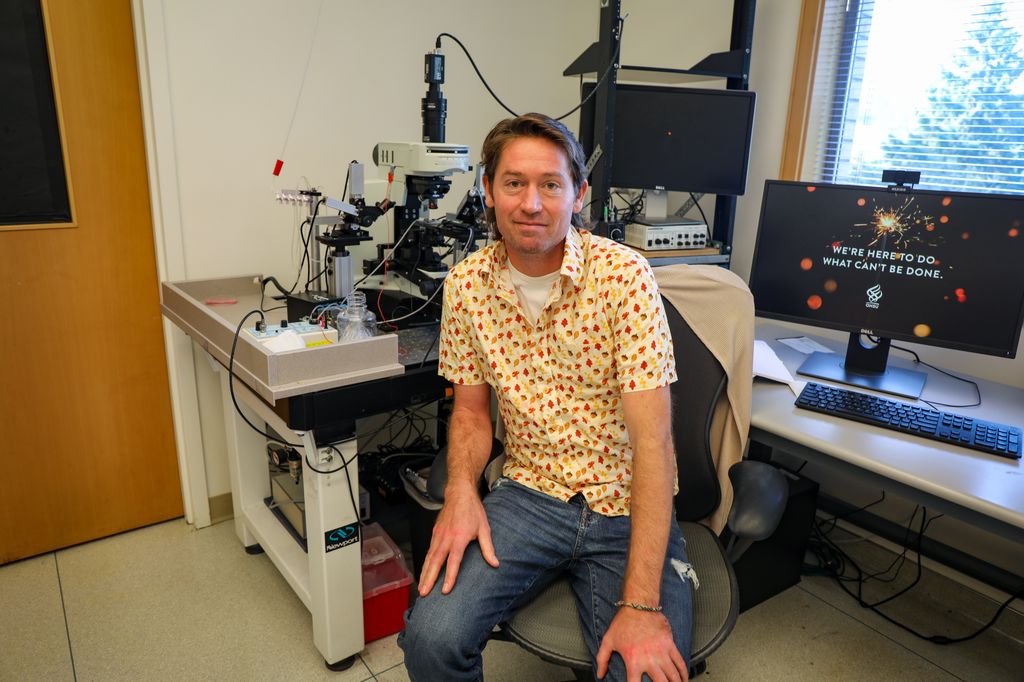 Skyler Jackman, Ph.D., assistant scientist in the OHSU Vollum Institute, is the senior author of a neurotransmitter discovery that is published in the journal Nature. He is sitting next to the scope used to view synaptic transmission. (OHSU/Christine Torres Hicks)

Scientists at Oregon Health & Science University have identified a long-sought gene-encoded protein that enables the brain to communicate a broad range of signals across gaps between neurons, known as synapses.

The discovery published today in the journal Nature.

Known as synaptotagmin-3, or SYT3, the protein helps to replenish the supply of chemical neurotransmitters that carry signals between neurons.

“When brain cells are active, they release neurotransmitters to communicate with their neighbors,” said senior author Skyler Jackman, Ph.D., assistant scientist in the OHSU Vollum Institute. “If a cell is very active it can exhaust its supply of neurotransmitters, which can cause a breakdown of communication and brain disfunction.

“It turns out that cells have a boost mode that replenishes their supply of neurotransmitters, but until now, we didn’t know the molecule that was responsible. We found that SYT3 is directly responsible for that neurotransmitter boost,” he said. “This gives us new insight about how brains can break down and fail to process information properly.”

Researchers generated “knock-out” mice that did not have the SYT3 gene. They found that those mice lacked the more robust level of synaptic transmission, compared with control mice that had the gene.

Notably, mutations of the SYT3 gene have been implicated in human cases of epilepsy and autism spectrum disorder. The research published today suggests the possibility of developing gene therapies or pharmaceutical approaches targeting SYT3, Jackman said.

“Imbalances in neurotransmitter release are the underlying causes for many neurological disorders,” said lead author Dennis Weingarten, Ph.D., a postdoctoral researcher in the Jackman lab. In the future, he said, “understanding these molecular switches — such as SYT3 — is a crucial step for us to combat these diseases.”

Jackman’s lab specializes in the study of synaptic transmission. The human brain contains hundreds of trillions of synapses. Discovering the molecules that endow these specialized structures with their unique properties is essential for understanding brain function and neurological disorders.

“Synaptic transmission is fundamental for sensing our surroundings, making decisions and nearly every other feature of our inner world,” Jackman said.

This work was supported by the Whitehall Foundation, the Medical Research Foundation, and the National Institutes of Health Imaging Core Facility, award P30NS061800.

Skyler Jackman, Ph.D., assistant scientist in the OHSU Vollum Institute, is the senior author of a neurotransmitter discovery that is published in the journal Nature. He is sitting next to the scope used to view synaptic transmission. (OHSU/Christine Torres Hicks)