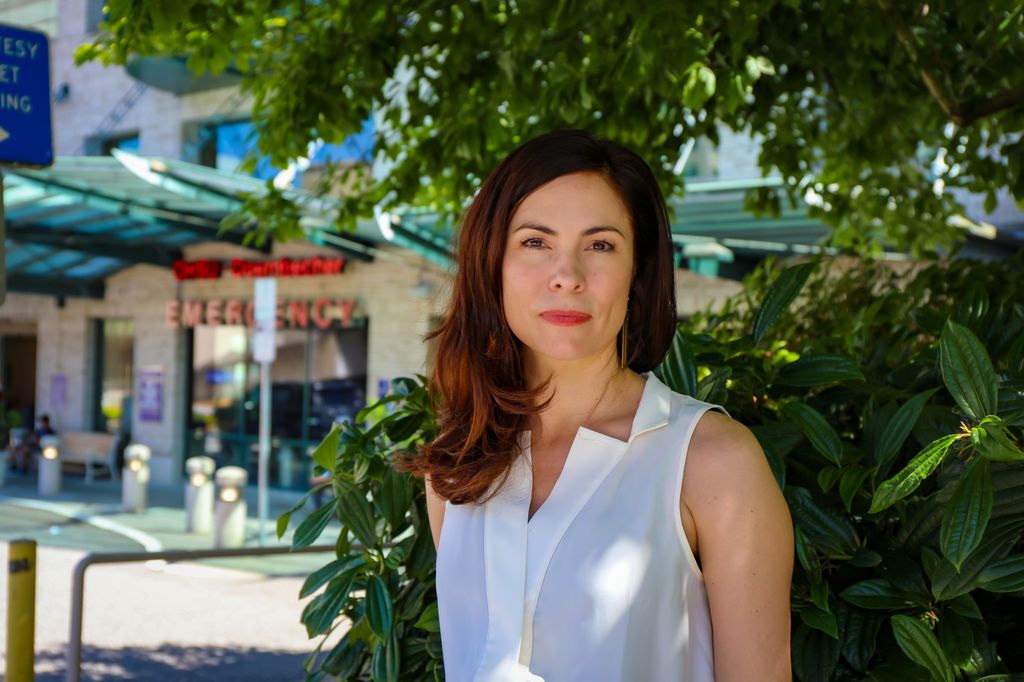 Kathleen Carlson, Ph.D., director of the new center and an associate professor in the OHSU-Portland State University School of Public Health, stands outside the OHSU Hospital emergency department on Marquam Hill in Portland on June 23, 2022. (OHSU/Christine Torres Hicks)

The report found the highest per-capita rates of firearm injury visits to emergency departments in Douglas, Jefferson and Multnomah counties — representing areas of the state covering timber country in Southern Oregon, the high desert of Central Oregon, and the state’s most populous urban county, respectively.

“This report shows that firearm injuries are not just a Portland problem,” said Kathleen Carlson, Ph.D., director of the new center and an associate professor in the OHSU-Portland State University School of Public Health.

Carlson is an injury epidemiologist in the OHSU-PSU School of Public Health and a core investigator with the Health Services Research Center of Innovation at the VA Portland Health Care System. She is leading the effort to monitor firearm injuries under a contractual arrangement with the Oregon Health Authority, tapping federal funding from the Centers for Disease Control and Prevention. Carlson has also been leading the formation of the new center this year with seed money provided by the Silver Family Innovation Fund through OHSU.

The center’s inaugural report will be updated regularly on an online dashboard as data are compiled from a state surveillance system though a collaborative effort between the School of Public Health and the Oregon Health Authority. 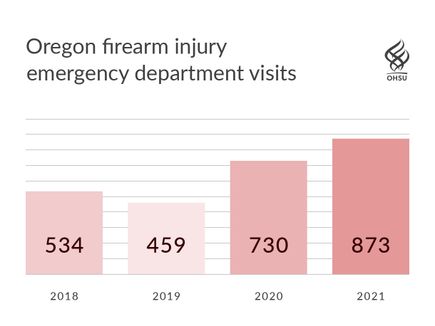 The report noted that 592 people in Oregon died from firearm injuries in 2020.

An additional 730 people survived gunshots that same year and were treated in hospital emergency rooms and urgent care centers. Among the injuries for which a cause could be determined, the report reveals unintentional injuries accounted for the greatest proportion of injuries treated from January 2018 to June of 2021.

“We know a lot about firearm deaths, but we don’t know as much about nonfatal injuries,” said Susan DeFrancesco, J.D., M.P.H., a senior research project manager in the OHSU-PSU School of Public Health and one of the researchers who compiled the report. “Our goal is to provide data that contribute to better understanding the burden of firearm injury in our state.”

To that end, the authors are working to improve reporting among hospital emergency departments that provide the data to the state surveillance system that researchers are using. Currently, only about 40% of 1,753 manually reviewed records of firearm injury emergency department visits, reported to the system from 2018 to 2021, included information about how the injury occurred; whether it was unintended discharge such as a hunting accident; or, whether it was an assault or an attempted suicide. This makes it more challenging to pinpoint the most effective prevention strategies for the majority of nonfatal firearm injuries that occur in Oregon.

Researchers in other states have reported a similar lack of specificity, DeFrancesco said.

One thing the report makes clear is that people of color are injured at a disproportionately higher rate compared with their share of the overall population in the state. For example, about 14% of the total number of firearm injury emergency department visits were among people who identified as Black or African American — even though that group comprises 2% of the state’s total population.

The report describes how this greater burden experienced by communities of color exists due to “upstream” causes of health and injury disparities. That is, deliberate and historical practices and policies have resulted in community disinvestment and unequal access to social, economic and educational opportunities, all of which influence people’s health and safety.

“The details are alarming,” said Robin Wisner, a minister and city councilor in Maywood Park just east of the Portland city limits.

Wisner, who lost his own son to gun violence, was among community members who consulted with the researchers in formulating the inaugural firearm injury report. He said he hopes that by compiling the number of firearm injuries and their cause, health professionals and civic leaders can begin to address gun violence as the epidemic it is.

“I believe that if we’re able to send a man to the moon, then surely we can reduce gun violence,” he said.

Robin Wisner is a minister and city councilor in Maywood Park just east of the Portland city limits. (Courtesy of Wisner)

Kathleen Carlson, Ph.D., director of the new center and an associate professor in the OHSU-Portland State University School of Public Health, stands outside the OHSU Hospital emergency department on Marquam Hill in Portland on June 23, 2022. (OHSU/Christine Torres Hicks)