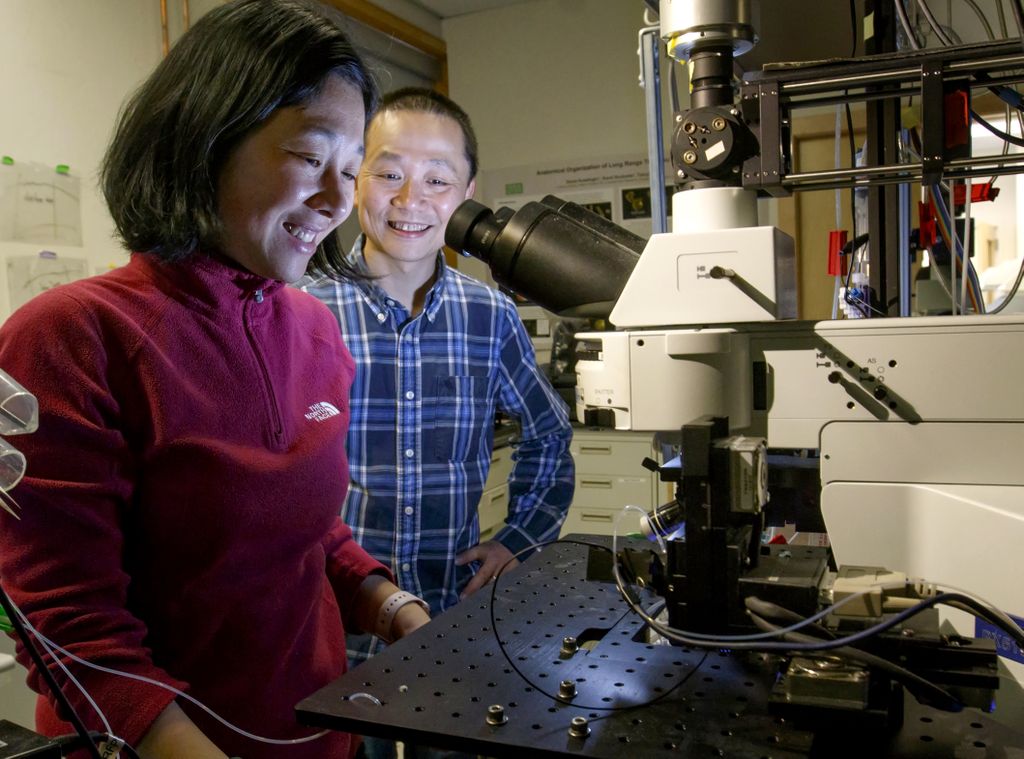 Tianyi Mao, Ph.D., and Haining Zhong, Ph.D., are scientists with the OHSU Vollum Institute. The pair's recent discovery of how adenosine operates in the brain is expected to help create new treatments for Parkinson's disease. (OHSU)

Researchers at Oregon Health & Science University have discovered that the neurotransmitter adenosine effectively acts as a brake to dopamine, another well-known neurotransmitter involved in motor control.

Scientists found that adenosine operates in a kind of push-pull dynamic with dopamine in the brain; the new discovery published today in the journal Nature.

“There are two neuronal circuits: one that helps promote action and the other that inhibits action,” said senior author Haining Zhong, Ph.D., scientist with the OHSU Vollum Institute. “Dopamine promotes the first circuit to enable movement, and adenosine is the ‘brake’ that promotes the second circuit and brings balance to the system.”

The discovery could immediately suggest new avenues of drug development to treat symptoms of Parkinson’s disease, a movement disorder where the loss of dopamine-producing cells has been widely implicated as a cause.

Scientists have long suspected that dopamine is influenced by an opposing dynamic of neuronal signaling in the striatum — a critical region of the brain that mediates movement along with reward, motivation and learning. The striatum is also the primary brain region affected in Parkinson’s disease by the loss of dopamine-producing cells.

“People for a long time suspected there has to be this push-pull system,” said co-author Tianyi Mao, Ph.D., a scientist at the Vollum who happens to be married to Zhong.

In the new study, researchers for the first time clearly and definitively revealed adenosine as the neurotransmitter that acts in an oppositional sense with dopamine. The study, involving mice, used novel genetically engineered protein probes recently developed in the Zhong and Mao labs. An example of that technology was highlighted last month in a study published in the journal Nature Methods.

Notably, adenosine is also well known as the receptor that caffeine acts upon.

“Coffee acts in our brain through the same receptors,” Mao said. “Drinking coffee lifts the brake imposed by adenosine.”

In addition to Zhong and Mao, Lei Ma, Ph.D. of the Vollum Institute is the first author. Co-authors include Julian Day-Cooney, Ph.D., Michael A. Muniak, Ph.D., and Maozhen Qin of the Vollum; and, Omar Jaidar Benavides, Ph.D., and Jun B. Ding, Ph.D., of Stanford University.

OHSU scientists discovery could help in developing treatment for Parkinson's

Tianyi Mao, Ph.D., and Haining Zhong, Ph.D., are scientists with the OHSU Vollum Institute. The pair's recent discovery of how adenosine operates in the brain is expected to help create new treatments for Parkinson's disease. (OHSU)

Research Week 2017: ‘How can we use our brains to understand our brains?’