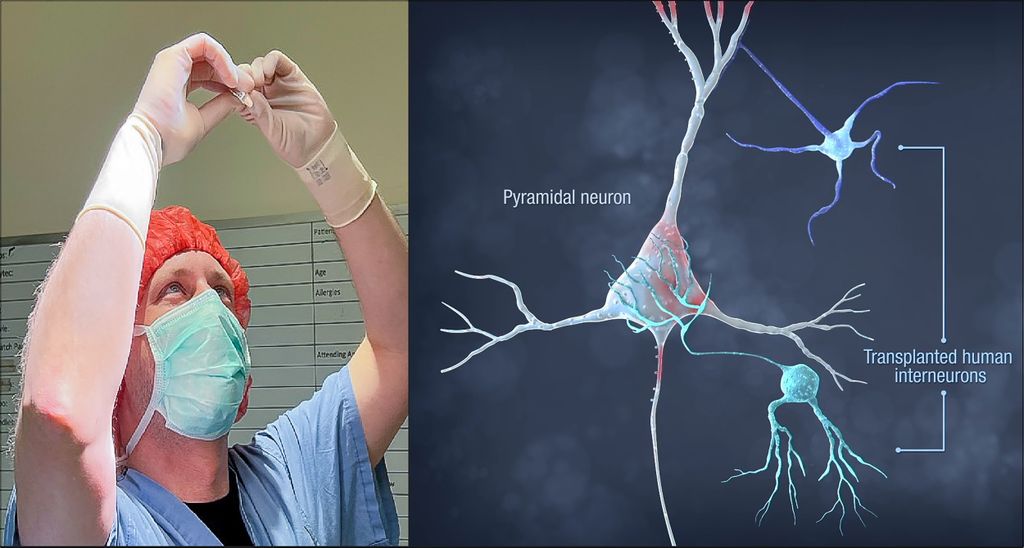 At left, Andy Adler of Neurona Therapeutics examines a vial of prepared NRTX-1001 cells. On Oct. 26, Oregon Health & Science University became one of the first centers in the country to implant inhibitory neurons derived from stem cells (NRTX-1001) to treat an intractable form of epilepsy. The procedure is part of a clinical trial. (OHSU)

Oregon Health & Science University in October became one of the first centers in the country to perform a new type of brain procedure to treat an intractable form of epilepsy.

The procedure involved implanting into the brain inhibitory neurons that are derived from stem cells. Known as NRTX-1001 cell therapy, the procedure was the second performed nationwide — and the first on the West Coast — as part of a clinical trial sponsored by Neurona Therapeutics.

Kim Burchiel, M.D., professor of neurological surgery in the OHSU School of Medicine, on Oct. 26 performed the procedure on a Portland resident who has endured an average of 14 seizures every month and didn’t find much relief from medication. The cell implant was prepared by OHSU’s Cell Therapy Lab, under the direction of Rebekah Knight, MLS, BSc, and Laura Newell, M.D., associate professor of medicine in the OHSU School of Medicine.

Three decades ago, Burchiel pioneered the use of deep brain stimulation in the United States to treat symptoms of Parkinson’s disease.

Today, he said he believes regenerative cell therapy implants — rather than devices like stimulators that require subsequent procedures to replace batteries — will be the next logical step in treating epilepsy, movement disorders including Parkinson’s, or even some forms of chronic pain.

“It’s only a matter of time,” he said. “Wouldn’t it be nice if you could do the procedure once and be done with it?”

The inhibitory nerve cells, called interneurons, are designed to quell hyperactivity in the focal point of the patient’s brain that causes seizures. Physicians expect it will take a few months to determine whether the new technique is successful in reducing seizures and improving quality of life. That’s about the time it will take for the new cells to form connections with existing brain cells and become functional at blocking seizures.

OHSU is participating in a clinical trial organized by Neurona Therapeutics, which is seeking to enroll 40 participants across the country. The OHSU patient is among 10 patients nationwide to be enrolled in the first open-label stage of the trial, which involves a single, one-time implantation of the NRTX-1001 neural cell therapy, derived from human stem cells, that produces a type of neurotransmitter known as GABA that blocks overactive impulses between nerve cells in the brain.

The therapy, if it proves safe and effective in the clinical trial and is approved by federal regulators, would provide an option for patients whose seizures aren’t effectively controlled by medication.

“There is a large group of people with drug-resistant seizures,” said David Spencer, M.D., professor of neurology in the OHSU School of Medicine and lead investigator for the clinical trial at OHSU. “The cell therapy approach may eventually be broadly applicable to this group. Although these are still early days, if successful, it has the potential to be a sea change in how epilepsy is treated.”

The standard form of surgical intervention for epilepsy involves removing the small portion of the brain where the seizures emanate. Burchiel said that if the regenerative cell therapy implants prove to be ineffective, patients could always have the option to remove, or resect, the seizure focal point through a subsequent surgery.

“We have a fallback option that’s pretty strong,” Burchiel said.

The clinical trial is funded in part by the California Institute for Regenerative Medicine.