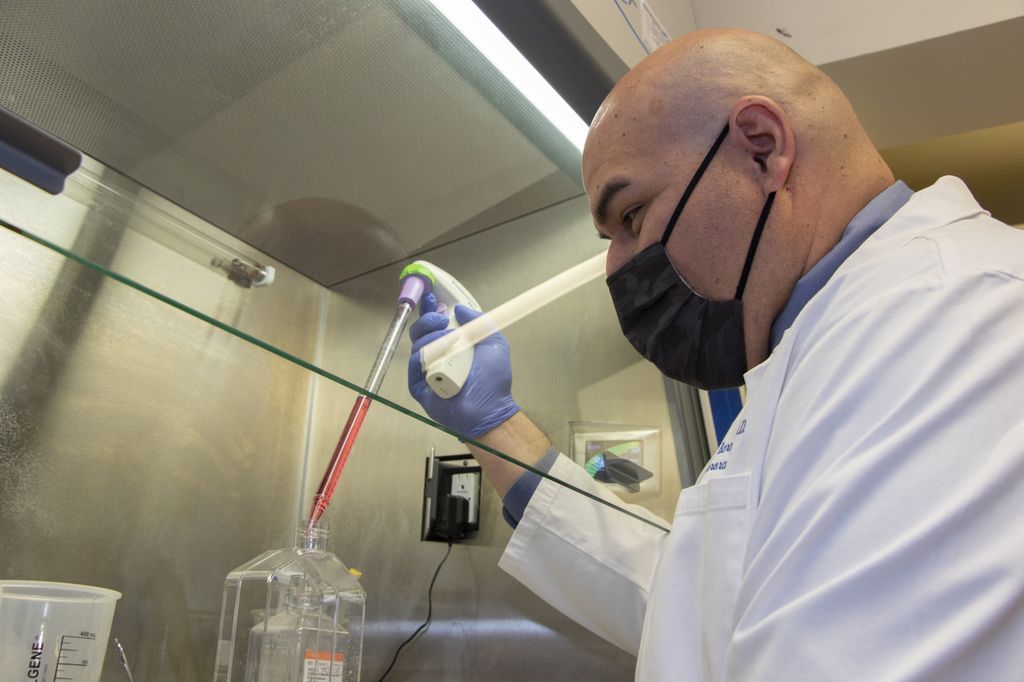 Ramon Barajas Jr., M.D., is the latest in a long line of physician-scientists in the field of brain imaging at OHSU. He traces his interest in science through his own family. That includes his paternal grandfather, who had limited formal education but was adept at improving crop yields in tomato fields of Northern Mexico. (OHSU/Josh Andersen)

Ramon Barajas Jr., M.D., is the latest in a long line of physician-scientists at Oregon Health & Science University to advance the field of brain imaging.

As a neurological radiologist, his research is focused on developing techniques to discern the extent of brain tumors using new imaging approaches in OHSU’s Department of Radiology and Advanced Imaging Research Center. Ultimately, the goal is to improve the lives of his patients.

“If what we’re doing can prolong the life of people even just a little bit more – or reduce the stress that they go through – it will have definitely been worth it,” he said. “These are people’s lives that we’re dealing with.”

Barajas, associate professor of diagnostic radiology in the OHSU School of Medicine, arrived at OHSU in 2015.

“When I came here, I paired up with Dr. Ed Neuwelt, who is a titan in brain tumors,” Barajas said. “Dr. Leslie Muldoon runs the preclinical work, and Dr. Prakash Ambady runs the clinical service now. Pairing up with them has just been critical.”

Working with OHSU’s highly regarded Blood-Brain Barrier program led by Neuwelt, Barajas is focused on improving the ability of physicians to correlate images of blood vessels and immune cells with tumors in the brain.

“The best way to find out where a growing tumor is located is to use our blood vessel and immune cell imaging approach,” he said.

Over the course of a patient’s treatment, Barajas is tracking how a tumor advances or recedes based on the visibility of immune cells and blood coursing through the brain measured by magnetic resonance imaging, or MRI. It’s a far less intrusive way of tracking the tumor’s growth than another tried-and-true method: Surgery.

“We’re trying to save people that extra surgery if we can,” he said.

Part of a long line of scientists

Barajas traces his own interest in science to his family. He grew up in Southern California as part of a long line of scientists – albeit not all formally trained.

His paternal grandfather, for instance, farmed tomato fields in Northern Mexico. Although Barajas noted that his grandfather didn’t advance beyond grade school in formal education, he was extremely adept at applying scientific principles to improve crop yield.

Barajas sees a parallel in his own career.

“It’s trying to figure out the mechanism by which life survives,” he said. “Plants need water, and I guess you could use the same analogy with brain tumors: Tumors need blood to grow, and our work is looking for ways to detect that growth earlier than we would otherwise.”

Barajas recently lost a close cousin to glioblastoma. He remembers feeling helpless to understand the tumor’s progression followed by the profound sense of loss in losing a loved one.

“Ultimately, my goal is to help figure out ways to help these people survive longer and have less stress and consternation during the process,” he said. “Our goal is to alleviate some of that anxiety by being more specific about what’s happening – both good and bad.

“If the treatment isn’t working, you want to know that early so you can change course and do something that’s more effective.”

Barajas is motivated by the chance to improve cancer care, and also is deeply grateful for those patients who choose to participate in research studies.

“None of this is possible without the patients,” he said. “They’re coming in to do this stuff when they are dealing with a fatal disease. I’m grateful because they’re spending several hours with me rather than their loved ones. Their altruism is truly inspiring.”

Ramon Barajas Jr., M.D., is the latest in a long line of physician-scientists in the field of brain imaging at OHSU. He traces his interest in science through his own family. That includes his paternal grandfather, who had limited formal education but was adept at improving crop yields in tomato fields of Northern Mexico. (OHSU/Josh Andersen)