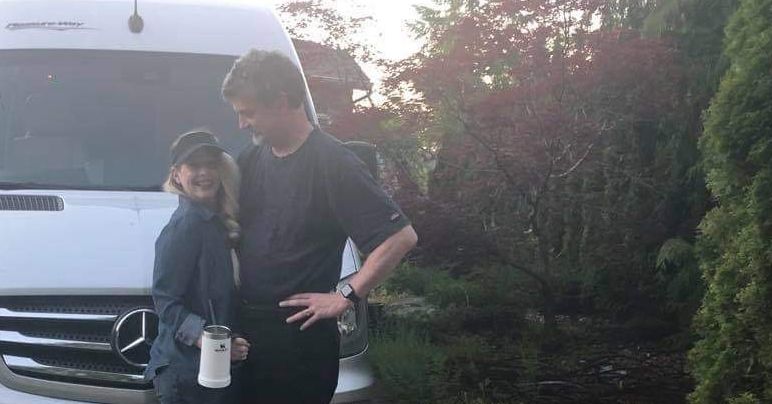 Kevin and Amanda Lyle are ready to explore the country following Kevin Lyle's successful deep brain stimulation surgery at Oregon Health & Science University. "If it hadn't been for the treatment, we wouldn't even be entertaining the idea of traveling," he said. (Photo courtesy Kevin and Amanda Lyle)

Kevin Lyle had been looking forward to new adventures following his retirement in 2019. However, Parkinson’s disease made it a struggle to so much as drive to the grocery store.

Now, thanks to cutting-edge brain surgery at Oregon Health & Science University in early February, he is ready to hit the road.

He and his wife, Amanda, are selling their house on Washington’s Hood Canal and heading to Arizona to help their daughter start medical school. After that, they’re planning to drive across the country in a newly purchased recreational “sprinter van.”

“If it hadn’t been for the treatment, we wouldn’t even be entertaining the idea of traveling,” he said. “I can drive the damn thing. It was getting questionable there for a while.”

Lyle is benefitting from the latest generation of brain implant technology.

On Feb. 1, Lyle was among the first patients across the country to be fitted with the latest FDA-approved version of a pulse generator for a brain implant designed to control involuntary tremor associated with Parkinson’s disease.

The model, Boston Scientific’s Vercise Genus, is smaller and thinner than previous models. The electrode is also more precise in focusing on the area of the brain causing tremor while minimizing unwanted side effects.

“This new battery is smaller, thinner and MRI-compatible,” said Delaram Safarpour, M.D., MSCE, a neurologist who serves as medical director of OHSU’s long-established Deep Brain Stimulation program. “This platform gives us the opportunity to very carefully tailor the amount of current that should go to each point of contact in the brain.”

In Lyle’s case, his surgery at OHSU comes after a previous DBS surgery in Seattle three years ago. Lyle, 62, said the initial surgery lessoned his tremor, but it left him with an unwelcome side effect of pain in his right leg. Walking was difficult.

Amanda Lyle sought out another option.

She knew OHSU neurosurgeon Kim Burchiel, M.D., was a pioneer in the field, having been the first in the United States to use DBS more than three decades ago.

“My wife reminds me that Dr. Burchiel is who she wanted me to go to in the first place,” he said.

In 2019, Lyle made the trip to Portland for an assessment by an interdisciplinary team of experts that included physical therapy, speech therapy, social work and neuropsychology as well as pre-operative medicine, neurology and neurosurgery. His candidacy for surgery was carefully reviewed by all members of the team followed by a discussion on whether to recommend surgery.

The Lyles were impressed by the fact that the team put its focus on improving his quality of life and minimizing the burden of disease. For some patients, that means surgery. In other cases, it may mean changing medications or recommending other less-intrusive forms of therapy.

Then the pandemic hit. OHSU, like other health systems, had to curtail surgeries in order to ensure the hospital was able to accommodate surges of patients sickened by COVID-19.

Finally, in January, he got the call. A space was available with Dr. Burchiel.

‘Now is the time’

After removing the previous electrode, Burchiel implanted the new version from Boston Scientific as soon as it was FDA-approved. Following the surgery itself, Lyle returned to OHSU for follow-up visits with Shannon Anderson, M.P.A.S., PA-C, the program’s clinical coordinator who works with patients to fine-tune the device’s settings using a smart tablet.

“It went really well,” Lyle said. “I have no leg pain, and I’ve been able to cut my prescription of medications to control the tremor basically in half from what it was.”

Safarpour said the new state-of-the-art device uses multiple independent current control. That means each of the electrode’s eight contacts can be adjusted to receive certain amount of current. Also, the two middle contacts have directional stimulation capability, which allows for steering the field of stimulation in a certain direction to maximize the benefits and minimize side effects such as slurred speech, wobbly balance or – in Lyle’s case – pain in his right leg.

Lyle, who spent a career as a controller and accountant for a timber company, said he realizes brain surgery isn’t for everybody, but it’s worked out well for him. He was struck by the improvements after his programming visit by Anderson.

“She turns certain slide bars on the clinician programmer and my tremor just falls off to practically nothing,” he said. “There is a sweet spot.”

Thanks to the surgery, the couple is looking forward to life’s new adventure.

“We have no idea at this point where we’re going to end up,” he said. “I haven’t really seen the eastern United States, and we just decided now is the time to do it.”

Kevin and Amanda Lyle are ready to explore the country following Kevin Lyles successful deep brain stimulation surgery at Oregon Health & Science University. If it hadnt been for the treatment, we wouldnt even be entertaining the idea of traveling, he said. (Photo courtesy Kevin and Amanda Lyle)